Sears is dying because of—Pensions? I don’t think so. 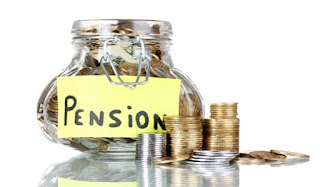 Sears is dying because of—Pensions? I don’t think so.
On September 13, 2018, Edward Lampert, CEO of Sears Holdings, said in the Sears Holdings blog:

In addition to the very difficult retail environment, Sears has also been significantly impacted by itslong-term pension obligations(emphasis mine).In the last five years, we contributed almost $2 billion, and since 2005 we have contributed over $4.5 billion, to fund our Pension Plans. (https://blog.searsholdings.com/eddie-lampert/update-on-our-transformation/)

Like many other brick and mortar retailers, Sears has encountered very substantial obstacles to profitability as a result of the enormous changes to the retail environment caused by the ever-increasing trend to online shopping.

The second statement is clearly true. The first one is an excuse for bad marketing and merchandising. My view is that failure to reinvent themselves and become relevant in the current retail environment- online shopping or not- is why Sears is dying, not pension costs.To support this thesis, let’s compare Sears to another mass merchant who faced the same brick and mortar challenges that Sears did-Target. Go into a Target store today and you see tangible evidence of what they have done to face the changing retail landscape--neat and clean stocks, private brands that look much better than mass market, etc.- at Sears there is no such evidence (remember the Sears Holdings group also includes Kmart).

That being said, Sears has some iconic private brands such as Kenmore, Craftsman and DieHard, which should have led the pack. In apparel, there is little private brand development, Sears and Kmart relying (except, notably, for Joe Boxer, which they ruined as a brand) on national brands which can be bought anywhere).

Let’s go back to 2005 and compare with today for both retailers in several key financial and market elements that would tell the story.

So, in 2007, Sears share price was more than double Target’s. Market cap substantial. Share price is the interpretation of value creation by investors and market cap is the number of shares x share price. Share price may be inflated by limiting shares; that being said, it is still an indication of  who wants your shares. Doing the math, Sears outstanding shares in 2007 171.6 million; today 108 million. Target, on the other hand, 670 million in 2007 versus 526.5 today. Yet the value per share is substantially higher.

Let’s look inside the financial statements of both companies. Heavy pension obligations would have significantly impacted Sears SG&A. Let’s take a comparative look at both companies at key points in time:

Until the current number, I don’t see a disastrous difference between the two. Do you?

Let’s dig deeper. To get to the bottom line, we must first look at the Gross Margin % line for both:

Overall, Target has done a much better job of managing GM (which has nothing to do with pensions). As we know, GM is a function of initial markup AND markdowns due to bad merchandising decisions on quantity or style or both.

We should next look at revenue for both companies:

(The big jump for Sears between 2005 and 2007 would be due to the merger with Kmart which created Sears Holdings.)

Now, the picture becomes clearer! Notice that in 2007 Sears and Target were in the same ballpark. Then the divergence begins-Target has grown continually, albeit not dramatically, while Sears has—tanked. So the main financial thesis is this: Sales and Gross Margin (discuss reasons later) were the reasons for Sears decline; blaming it on pensions is an excuse (which got a lot of press).

If we look back at SG&A for both retailers for the last ten years, we can see no dramatic difference (until today). Expenses are slower to impact for a retailer of this size than sales and gross margin-which is impacted by merchandising and marketing.We also know the concept of profit flow through—incremental sales which do not directly cause additional expense flow directly to the bottom line.
Clearly Target has had its struggles, well documented, as Sears, but the difference is that they managed to remain relevant and grow the business. Why?

Before we answer that, let’s look at two who did really well during that period—Walmart and TJX. Walmart has made a big push into online business, TJX none; both remain key brick and mortar retailers. Let’s take a look at some numbers:

So- Somewhat a tale of two retailers, but can help us reach a conclusion. Walmart GM% is less than Target or Sears, and their SG&A has grown 21% over the period despite sales almost doubling-ouch.

TJX, on the other hand, has improved GM% dramatically and managed SG&A well (only 6.5% growth—that being said, my principle would be that, if SG&A % doesn’t go down with that degree of sales increase, your expense control is sloppy at best.

What is common to all is that they have had challenges putting a lid on SG&A, in some cases despite blistering increases in sales. Calculate for yourself the absolute difference in $ of Walmart’s SG&A from 2005 until now. So-Sears SG&A over the period seems no excuse.

Which leads us to the bottom line conclusion. In no part of the blog post does Edward Lampert mention merchandising, marketing, efforts (except to say they are seeking partners for existing brands). That is where the others have succeeded and Sears has failed-generating sales through relevant and timely merchandising and marketing. Nothing else really counts in retailing.

Let me be clear- I am sure Edward Lampert knows the above, better than me, because he faces the real numbers every day. BUT- while the pension obligations were unescapable and not much could be done about them, EVERYTHING can be done every day about merchandising and marketing. THAT is where Sears failed.

PROOF: What’s in a name? How to develop a brand—Kmart Australia, which originated there in 1968, shortly after the US version, is a blazing success. You can read all the media and annual reports online, but here is some information from an article published in 2016 entitled, “What’s in A Name: Kmart succeeds as Kmart depletes”:

Both stores came from the same founder in the 60's, deal directly with cheap value ranges, focus on quantity and easy accessibility items and even have similar logos. So how is one chain dominating the industry while the other one suffers a slow demise?

Among other things, but what I said:

Wesfarmers Kmart’s image is a bit different to Sears Holdings. It hints that it is still youthful and cool, even though it’s good value. Their ads are often full of vibrant people aged 18-22, exceedingly lithe and probably unlikely to be found at an actual Kmart.

Edward Lampert, with all due respect to your expertise and difficult job, what did I get wrong? It is nothing but distracting and misleading to even imply that, significantly (your word) your problems came from pensions and the difficult retail environment.

(You may also want to read my previous article, “J.C. Penney and Sears—The Hollow Men-An American Tragedy”on my blog http://www.isourcerer.com)
at September 16, 2018 No comments: