Repost: Toys ‘Rnt Us- From Category Killer to Comatose

June, 2019. Media reports that Toys 'R Us will reopen for the 2019 Holiday season. In another article, "Toys 'R Us 'Reimagined': What will be different this time? " I analyze the information about the revived company and its chances for success. More likely, what killed it the first time is the reason TRU will stay dead.

Of all the sad retail stories I have heard this year,  this has to be the saddest. Not because the firm has gone from Category Killer to near death; the sad part is just how long the illness has been allowed to continue. Not all the sequence of failure is clear to me-but information and statistics from research into the company’s  and the industry’s history since 2004 keeps leading me to one persistent suspicion: The company was killed (it is all but dead now) by greed of executives and financiers who could not see through their own pockets to make changes that would help the company get back on its feet.

Toys R Us declared bankruptcy in September of 2017. But the story of its decay goes back at least as far as 2004.  Weighted under unpaid debts of around $800 million including $400 million in interest payments that it had been laboring under since a leveraged buyout in 2005. Here’s the first greed part:

Understatement: Logic and Wisdom. What good use could $21 billion have been put to? And what is the justification for an executive who is ostensibly a person who cares about the company to ask for a bonus in  that situation at all, much less a salary? Where I grew up, “bonus” is for when you do good-and only then.  OMG.

There are definitely MOAT issues that attributed to the slow and painful death of Toys R Us. We will discuss those below. But beyond that, there had to be management and process failures going back to 2004. At that time, Toys R Us and Amazon were embroiled in a lawsuit where Toys R Us claimed that Amazon breached a contract between the two for TRU to be more or less the exclusive retailer and manager of Toys on the Amazon website. In its counterclaim,

Amazon, of Seattle, denies that it breached its agreement with Toys "R" Us, saying the language of their contract allows for exceptions that permit Amazon and other merchants to sell products that compete with offerings from Toys "R" Us. Amazon further alleges that it urgently needs other merchants to list competitive products on Amazon because Toys "R" Us has failed to keep toys and other items in stock. During key holiday-shopping weeks, Amazon alleges, Toys "R" Us has been out of stock on more than 20% of its most popular products. Amazon also alleges that Toys "R" Us has failed to provide Amazon with a comprehensive selection of toys for sale on the Amazon site -- in particular, low-priced toys (Wingfield, Nick. Wall Street Journal, Eastern edition; New York, N.Y.[New York, N.Y]29 June 2004: B.7.
Toys R Us won this lawsuit, garnering a $51M settlement from Amazon (http://abcnews.go.com/Technology/story?id=78306080)(Amazon don’t do that (exclusives or let anyone control their website business, or even pricing) nowadays, and this may have been one of the key lessons learned). But Amazon’s claims seem very real, in view of what is happening now, 13 years later.

Inexplicably, the next year, three hotshot VC’s (considering what happened since, remind you that VC once stood for Viet Cong) KKR, Bain and Vornado took Toys R Us private with a buyout of $7.5 billion, from which point the company was saddled with the above mentioned $400 billion in debt payments. On this subject, and not knowing how the debt was structured, I can’t help but get a feeling that someone made money on this deal.

Just two months after the above article, the WSJ reported, “Toys 'Were' Us?; Undercut by Big Discounters, Toys 'R' Us Is Indicating It May Get Out of the Business.”  The article reports that TRU’s MOAT had been breached by Walmart and “In a surprise move, the once-dominant toy retailer said it is exploring a sale of its core 1,200-store toy chain” and reported an analysis that said, “Given the competitive threat of Wal-Mart today, Toys 'R' Us will not be able to continue as a going concern in the long term without drastic structural changes." (Joseph Pereira, Rob Tomsho and Ann Zimmerman. Wall Street Journal, Eastern edition; New York, N.Y.[New York, N.Y]12 Aug 2004: B.1.

The sale happened. And then what? Was Toys R Us somehow frozen in time between 2004 and 2017 when they finally declared bankruptcy? How many billions were collected by the VCs and the company’s executives while the company died a slow death?

Let’s look at where the distribution of the toy business is today: 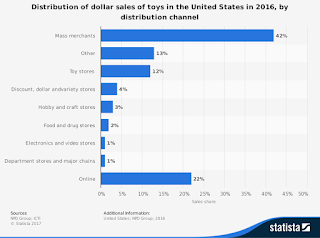 So what is evident here? First, WM and the mass merchants  now dominate the toy business. Why go to a shop to buy toys and only toys? Here is the sad part—the answer, in Toys R Us heyday, was NOT the prices, which is the only weapon WM can use to penetrate their moat. It was the EXPERIENCE. Kids dragged their parents to TRU because it was FUN. I don’t care who you are, Walmart is not FUN.

So here’s screwup number 1, TRU. In your sadness about the declining sales and challenges, you let Geoffrey the Giraffe become Bad Santa. You had the experience nailed, and you let it die. Now you are.

Next- If I am a category killer in a category that is dying or declining or flat, what should I do?
Clearly, find something else to sell. Babies stuff is a difficult business with birth rates not growing and economy not healthy. So what? 1. Pet Toys- Pet ownership has skyrocketed in US and globally during the period. 2. Grown up kids toys like Xbox etc. 3. Expand your target audience and maybe change your name to Fun Stuff R Us or something better than that. What not to do? Nothing, and that is what you did.

I know. You think that kids nowadays are not interested in toys. I thought so too.
Suprisingly, the facts state otherwise: 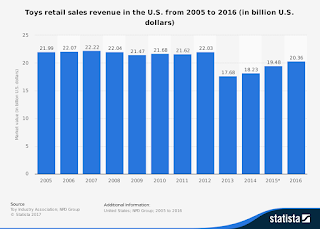 While toy sales have declined, the percentage is really not that much since 2005.  So let’s forget that excuse.

What is true is that, since TRU broke up with Amazon, they forfeited the online business to them. As has most everyone else: 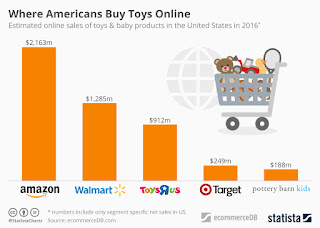 Note to self: see Target lurking there in the grass. Watch who eats the carcass of TRU.

So, like everything else, about 50% of the online commerce is forfeited to Amazon. Now it seems to me like the hierarchy of jungle cats where all must genuflect to the leader. Until, that is, someone has the balls to challenge. Not rocket science.

So what will become of the toy business after Toys R Us is only a story? Anybody with half a brain will see that the toy business now is inextricably connected to the current world of technology, and that children who grow up in the tech world only want to play with stuff that is in synch with the world around them. I think that this is a virgin business; nobody has thought this through. I see a future that is fun and in sync with Alexa.

As far as Toys R Us, they could be part of this future because they still have about 1500 locations. Let’s be clear: there are only two things that Amazon envies: 1. Brick and Mortar and 2. International Business. But that would require a selfless quest on the part of management.

Survival/MOAT/Sustainable value growth is my business. I could make this happen. So I suppose TRU management could do. As it is, it is a big short.