Where is John Galt?

Where is John Galt? 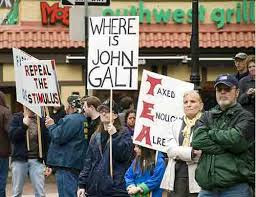 Did Ayn Rand know this was coming? Or did she just fear it was?

Following the comedy and melodrama of the run-up to the 2020 Presidential Election, one gets the definite feeling that something (or, rather, someone) is missing.

Bernie Sanders, who seems to be the front runner amongst the candidates that compose the Democratic race, Is a “democratic socialist” with little respect for the rewards of capitalism. Wealth should be spread and shared, with no mercy for “earned.”

President Trump, who seems to be the eventual winner due to a walkover, is a venerable businessman who has injected a stubbornness and pride into the office that his predecessors didn’t have the guts for, even if they believed it. But, despite his rhetoric to the contrary, lacks the compassion for those who are the collateral damage of economic growth.

So it is a race of extremes. IS that all there is? Can’t there be a President who can be tough with international affairs, supportive of business and entrepreneurialism, but considerate of the working man at home? Can anybody save the legacy of American entrepreneurialism without pissing half the people off? Can anybody achieve the balance between depriving the average person of medical care and giving away assets that other people rightfully earned, thus making welfare more profitable than workfare?

Where is that person? Where is John Galt?

For those of you who never read or even heard of the book “Atlas Shrugged" by Ayn Rand (1957), John Galt was a mysterious (but real) character in the book who represented the best of all worlds between the rich industrialists and the working class. Described as:

“Galt is acknowledged to be a philosopher and inventor; he believes in the power and glory of the human mind, and the rights of individuals to use their minds solely for themselves. He serves as a highly individualistic counterpoint to the collectivist social and economic structure depicted in the novel, in which society is based on oppressive bureaucratic functionaries and a culture that embraces mediocrity in the name of egalitarianism, which the novel posits is the end result of collectivist philosophy.” (Wikipedia)

The character of John Galt is seen as the glue between those who make and those who take.

Take President Trump, Bernie Sanders and the balance of the Democratic candidates, and tell me the choice is what? Who is the lesser of all the evils? Who is less embarrassing when they tweet or speak? So where is John Galt?

But let’s envision two extreme scenarios: One is where a few rich industrialists build empires that builds a nation to world leadership- like JP Morgan, Rockefeller, Carnegie, Vanderbilt, Ford- despite deplorable conditions for the common man that helps them to build their empires; The second is that in which the government power leans toward taking away assets from those who earned them (maybe not in a nice way), and distributing it amongst the rest of the population, regardless of merit or work. Sorry to say, the last one would not have built America.

The impossibility of the second scenario is exemplified by China under Mao. He had dreams of spreading the land and wealth of the landlords to the poor, disenfranchised common man. But did that create a new incentive for people to work hard and become rich? I think not, because if they were very successful, they, too would end up like the landlords. It was not until Deng Xiao Ping released the people to work hard, fulfill their dreams AND become rich that modern-day China was born.

So where do we go in 2020 United States? Trump, who reminds everyone of the Robber Barons, and who common people appreciate but do not trust? Sanders, who will take your hard earned money. Medicare and Social Security and distribute it among people like the beggar who got on your subway car and made a pitiful speech? The rest of the gang who beg for the Democratic nomination (seriously, someone give me an impression or a meme of any of them being the representative of the most powerful country on the planet)? Who will lead us?

Who are we looking for? Kennedy, Reagan? The only certainty, in my view, is that person is not among those presented to us now.

So, back to my original question: Where is John Galt? We need to find her or him, soon.

BTW, the book is quite long, but worth reading. Timely and it will change your attitude forever.
at February 28, 2020 No comments:

Want to go forward post COVID-19. We will! Tell me what you need

If you need something totally refreshing and beautiful as a break from my business focus, or you know someone who loves poetry, creative writing and sensitive, poetic images of life, visit www.lotusmoongate.com
We think our blogs complement each other, as do we.
Please give us your feedback! We love your comments.

Blockchain for Supply Chains 2020: Will this ever work for the Fashion Industries?

In April of 2018, after some rapturous reading about Blockchain, and with stars in my eyes as to its potential for the Fashion Industries, ...

Currently, Michael Serwetz is enjoying the fruits of so many years of travel and intensive experience:
Creating a groundbreaking, disruptive business (with the brilliant Lotus): Lotus & Michael: The Art of Shirts;
Inspiring students at NYU, Baruch and FIT to be prepared for great careers in International Business.
During his career, he traveled the world for more than 35 years; he led major companies to unprecedented and game changing success. Built businesses and teams at Federated, Levi Strauss & Co., Joe Boxer and GoldToe Moretz.
All that prepared him well for clear vision and a leadership position in today's dynamic and amazing marketplace as well as the privilege of preparing others for a successful career.
Audaces Fortuna Iuvat- Fortune Favors the Brave