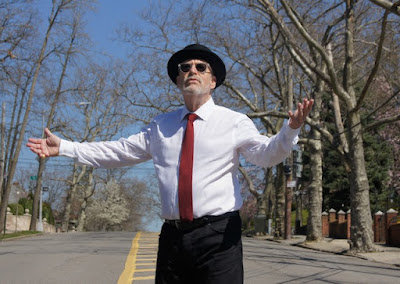 Are we doomed to be sloppy?

An article in The Economist 1843 Magazine written in March 2021 thinks so—maybe.

What do you think?

There is no doubt that the year of the Pandemic took a grave toll on apparel, maybe more than any other industry.  Let’s look at some numbers:

First, of all retail sectors, apparel and accessories have suffered the most, almost diving 100% last year and still seriously in deficit. 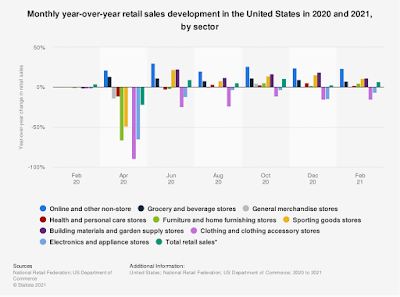 Next, let’s take a look at the total sales picture. From a peak of about $34 billion in November 2019 pre-Christmas, sales sunk to about $7 billion in May 2020 and only could recover to about $30billion at Christmas 2020, after operating in serious deficit for almost a year: 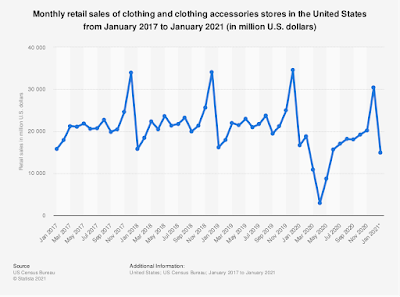 The kids didn’t get new clothes, either. Family clothing stores followed the same trend, but even worse; the nadir in May 2020 was about $700 million from a peak of almost $15 billion. 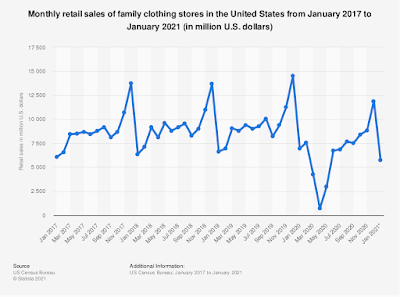 Some major companies did well during this period, and some did not. Take a look at the following graph and tell me what the common denominator is for those who saw increases: 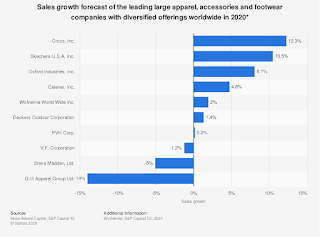 Crocs. Eh? You don’t wear those to the office or on a date. Wolverine- Moccasins, Hush Puppies? See the point now?

So, dressing up is dead and we all fall down in sweats? Hoodies for dinner? To a meeting, though? The author of the Economist article entitled, “Fashion Victim: Sweatpants are a Designer’s Worst Nightmare: The Shape of Things to Come,” [i]says, “The rise of sweatpants represents the demise of fashion as we knew it.”[ii]

So, is this true? Are we going to see hoodies in restaurants? In offices? My answer to that is no and no. And it has been for more than a year, which I have expressed in my isourcerer.com article in February of this year, my informal poll of nearly 100 students from the US and other countries begs to differ:

My students will happily shed their hoodies and sweatshirts to dress up when person-to-person and person-to-group interactions are permitted and safe. They were nearly unanimous about that. One student went so far as to say she felt like she would throw out her entire wardrobe. Bright colors, happy clothes that actually fit and don’t make you feel like taking a nap will come roaring back.

Those of us who have experience in the world of retail (pre-Pandemic and pre-Ecommerce) and have a good merchant’s sense of trends incoming all agree that the lack of buying clothes for a year (except online which seems to have been Crocs and Mocs) will have a snapback some are calling “the roaring 20’s (100 year anniversary which we hope will not end the way the last 20’s did), insofar as it will constitute not only wardrobe additions, but wardrobe replacement).

In fact, here is my contribution to the chorus, my solo as it were: I believe we are going to see a new attitude toward dressing that has been in remission since the jeans craze of the 1980’s and subsequent approval for casual dress in offices (because the boss wanted to wear jeans too). No, we won’t have dress codes to wear a tie and suit to work as we did in the 1970’s; if there is any code to come, it may be that offices set limits on how sloppy you can look.

The real trend will be a reaction to the Year of the Pandemic where people began to recognize that a sloppy you is not your ideal presentation to the world; in fact, it is pretty damn embarrassing. And that you are what you wear; look good, feel good (Ricardo Montalban vintage: “I feel mahvelous, dahling”). Wait-will “dress for success” come back into people’s psyches? It could be…

This revolution will also be a quality revolution. Renewed pride in your appearance will require your clothes don’t look cheap; this will spell trouble for those purveyors of disposable clothes like Inditex and H&M (I have complete faith that they will respond but it may take some time and rocky roads).

One more blow to the fast-fashion brands will be that people not only won’t want to look cheap, they will NOT want to look just like the person next to them (and also on the other side); so we will see a drive for Individualism in apparel, a definite departure from the cookie-cutter fashion that ruled the world pre-Pandemic.

We merchants had solemn responsibility to not only spot the fashion trends—fit, silhouette, fabric, the Black Swan (actually, significant fashion changes can come from the Unknown Unknown), but when we bought merchandise to populate our t-stands and round racks, we had better figure out the right color. There could be few worst disasters than having thousands of the right style in the wrong color. So here I go with another risky prediction, one which I have said before: Bright Colors can do the best job of externalizing our psyche and will have the most robust response both physical and online.

None of this is written in stone or on tablets (stone ones). And world events could easily get in the way of my predictions (such as European countries like France bungling the vaccine response and prolonging the pain of Pandemic). But I think, all things considered and not considering Black Swans (which you never get to consider until they show up at your door), my predictions are accurate.

The one thing that I can virtually guarantee is that the Economist column writer is wrong about the enduring influence of sweatpants on fashion. If anything, their influence will be a reverse effect.

The author backtracks and covers his butt at the end of the article. After a headline that pronounces sweatpants the Wicked Witch of fashion, he backtracks and says, “One day we will go out again and we won’t be wearing sweatpants.”[iii] So which is it, then? I guess it depends on when “one day” is. I can speculate on that: One day is 2021 Fall season to 2022 Spring season, the start will be fast and the momentum will leave many retailers in the dust.

And, therein lies the biggest danger to the revival of the fashion business: That retailers get lazy, or lack vision and merchant abilities, thus failing to prepare the inventory when the customer wants it, or blindly following the Pandemic Trend as if it were going to last forever. Google sweatpants and you will see that everyone from designer to mass market is rushing to compete in the Red Ocean of sweats. From the online merchandising, it would see that the Economist writer is correct.

Again, I don’t agree and think that stores are lobotomously missing a key post-Pandemic trend. That enduring incompetence can scotch this recovery; however, for those of us who have the right merchandise at the right time, it IS the Roaring Twenties. At the other end of the spectrum, the Grim Reaper will be invited to the party, as he was so many times in 2020.

Send me your opinions! You are part of the customer base. Then, when we get enough opinions, it will be more than opinion—it will be proof.

[i] www.economist.com/1843, “Fashion Victim: Sweatpants are a Designer’s Worst Nightmare: The Shape of Things to Come,” https://www.economist.com/1843/2021/03/17/sweatpants-are-fashion-designers-worst-nightmare?utm_campaign=the-economist-today&utm_medium=newsletter&utm_source=salesforce-marketing-cloud&utm_term=2021-03-19&utm_content=article-link-7&etear=nl_today_7