That’s the problem with denial. It never ends well.

As reported on Seeking Alpha by Samuel Riehn, after the stock dropped on the heels of an earnings call:

Victoria’s Secret seems to be struggling to move product without promotions, and the concern is that they will find themselves on a path to becoming a “perma-sale” store. (https://seekingalpha.com/article/4135413-l-brands-dropped-15-percent-today)

Take a look below at my pictures of a VS storefront. Did I call this one? Yes, I did.

Remember I called them out back in August with my “Bra or Bralette” piece.

According to this writer, their troubles started two years ago:

Ever since their turmoil started almost two years ago, they have been trying to rebrand themselves taking actions such as dropping their swimwear and print catalogs, but so far they have not recovered.

The linked article is from February 2017, Fortune (http://fortune.com/2017/02/22/victorias-secret/) and is entitled, “Victoria’s Secret Sales are down 20% and L Brands Stock is Plummeting.” This article starts by saying, “L Brands’ (LB, -1.49%) once dominant lingerie chain, Victoria’s Secret, is falling apart at the seams.”

The Seeking Alpha writer alluded that they blamed the exit from swimwear as a reason for the negative trend. This, friends, is the stuff of bubble.

If I were a stockholder, I would be pissed (except if I was one of the millions who are shorting the stock-94th most shorted of the S&P 500 (https://www.thestreet.com/story/14435696/1/lb-insiders-vs-shorts.html) .

Do you think they are asking for help? They didn’t ask me…

Clearly L Brands has no MOAT left. So what should they do? Leave the castle of denial and start attacking other MOATs. Be the disruptor.

Below is the original article from November 2017:

Being jobless for these months has taught me a lot.

(Which proves that, everyday of our lives and no matter at what age or stage, we can learn more than we could possibly imagine.)

When I first came back to the US after 10 years in China, and started this blog, it was to establish my “brand.” But as I began to learn more and more about the world of apparel and retail today (possible employers), I found that there was a clear message coming to me: The companies I had held in my mind as icons had, for the most part, lost their way, their identity and their customer.

Then, upon talking to many of them about possible employment, I found that they had no clue about the fix they were in. They were narrow-minded and sometimes (usually) arrogant. Rather than look for someone with the experience, talent and character to raise them up, it was business as usual. Here’s a particularly ridiculous example: After more than 30 successful years in global sourcing and retailing, Macy’s told me that a position whose title was “Sourcing Strategy” was not for me.

So here I am and here we are. My last article was about the “Category Killers,” a term I coined to refer to the companies that were reshaping retail by their laser focus on customer and product (in that order). Now we see the killed or to-be-killed. Various companies, various products, but they all have one thing in common: they are living in a bubble of denial.

It is an easy disease to catch when you are working in a self-reinforcing environment which makes you feel how great you are just by showing up to work, not by what you accomplished to make the world or your company better and more secure every day.

Let’s nominate some companies to start this “walk of shame.”

Victoria’s Secret. Billions spent on a world-renowned fashion show with world-renowned models. So cool. Despite that, the customer is leaving. Look at this, money talks:

This one through August 17. If I could find a newer one, the bottom of the chart would probably need to be expanded. (Note L Brands includes other companies such as Bath and Body Works, whose troubles are attributed to the stores being mall-based—yo, the decline of shopping malls is not new news, what are you doing about it? Tell Wall Street, since you sure won’t tell me-looks like same bubble of denial).

Wait, I love this excuse- Victoria’s Secret sales declines are attributed to their exit from the swim and apparel categories. (marketwatch: https://www.marketwatch.com/story/l-brands-problems-extend-beyond-victorias-secret-bras-to-bath-body-works-2017-08-31).

So you are going to focus your future on what you do best-bras?

That business also is evolving away from Victoria’s Secret, by their own hand. In my article, “Bra or Bralette?” I documented my prediction and reasoning why I thought the bralette would eventually replace the structured bra. This should be a good business for Victoria’s Secret, right? No. They also walked away from this business.

To quote myself in the aforementioned article, “But more than that, I am predicting the marginalization, if not extinction, of those who miss the signals of disruptive change, or see them and stand pat. I know a dinosaur when I see one.”

I know a bubble of denial when I see one.

Here are some pictures from one of Victoria’s Secret’s stores’ Christmas windows (what do you see that they have in common? I see the word FREE): 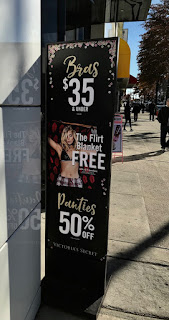 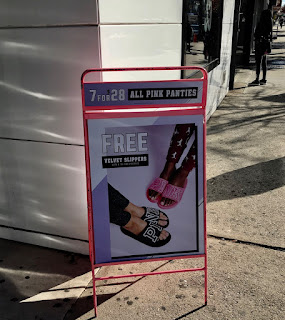 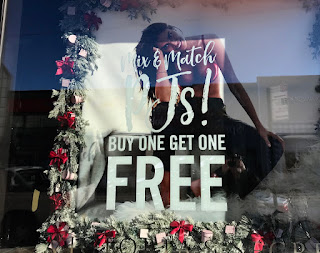 After announcing that they would be closing 50 stores instead of 20:

Talk about denial- First, we hear that J. Crew’s problems are due to the fact that clothes are going out of style. From the chairman and Legend Mickey Drexler:

Clothes are just not that important or as important as they were,” he said during during a conversation at The New York Times DealBook Conference. That, and we all seem to be glued to our phones. “[People are] not really hanging around in shopping centers," he added. "[Cell phones] are local villages, and you don’t have to go to the villages to see people.”

Then the new President Mike Nicholson claims that stores are going out of style:

“In order to drive top-line growth, we must evolve our business model from a traditional brick-and-mortar specialty retailer to a digital-first omnichannel business,” (last 2 quotes: http://www.refinery29.com/2017/11/182285/jcrew-store-closings-2017)

Tell that to Inditex. And H&M. And Lidl. It is refreshing that, at least, neither is blaming it on Amazon.

OK, you tell me: Bubble or no bubble?

So, back to my joblessness. If you go to Glassdoor, J. Crew has more than 100 jobs posted in the NY area. Even if I could get one of those jobs (and I probably couldn’t because I am not a narrow fit for the positions or some other unknown reason), I couldn’t do it. After all this, I can’t live in a bubble of denial.

Which is why, unless one of the Category Killers or a spanking new and exciting startup is willing to hire me, I will be seeking employment outside of the apparel industry, where I have succeeded for more than 30 years. What a waste….

I want to go home every day believing I did some good work for my customer, my company and the world of business. If I can’t, then something is wrong with where I am working, because in a company bound for success every employee, top to bottom, should feel that way every day.