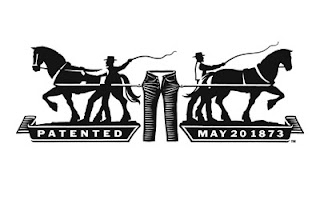 The above is Gartner L2's article written on 14 February 2019 (read, click here) that glorifies Levi's rise to file an IPO and their high rankings on customer search.

As Scott Galloway is a principal of Gartner L2 and a glorious skeptic (I miss "Winners and Losers in a Digital Age), I am a bit surprised that he and Gartner are so much of a cheerleader and lost all the righteous skepticism.

IF they looked into the numbers, they would see that Levi's
a. WAS public and privatized in the early 80's led by KKR.
b. has barely grown in the last ten years compared to the global denim market
c. is making most of its profit (and doing more than 50% of its business) in Europe and Asia, where customers will pay a high price for the prestige of the name, NOT the fashionability or even quality of the jeans compared to others.
d. Is NOT a major player in the global denim market, despite the fact that its brand name is somewhat generic for the product.

Let's take a look, tell me if you see something I am not seeing.

Let us start with the global denim market, as reported on Statista: 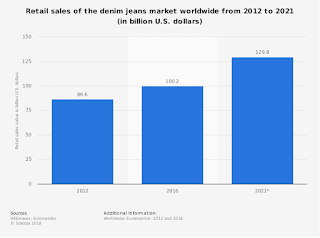 OK, then let's look at Levi's:

The majority of the increase in business in 2017 came from Europe and Asia (mostly Europe).

The plot thickens- US sales actually REDUCED in profitability despite a small increase, while Europe and Asia provided more than 80% of the revenue on 43% of the sales. How this happened is that Levi's can trade on its name in these markets to be able to charge high prices that it cannot begin to get away with in the US market.

So the name brand that is generic to US denim (reputed to be the inventor of same) is selling more offshore than in its home country. Is that healthy for a brand's longevity? If you check the story of Esprit, which was the most iconic brand of women's sportswear in the 1960's and 1970's, and now cannot even be found in the US, you can gain some insight.

So what does that tell you about Levi's strategy and their prospects? To begin, that Levi's value proposition delivers less than 5% of the global market, and that number is being supported by sales outside of the US.

Next, that it is unable to make money in the competitive US market and has to  compete on price, thus reducing its profitability. Warren Buffett would tell you that this is proof positive that Levi's has either no MOAT or a very narrow one which is getting narrower.

We know for a fact that being an iconic brand with a storied American History is no guarantee of success IF you don't preserve your identity and relevance. Enter Sears, which is not dead yet corporately, but in the minds of shoppers, is.

Let's view this as I would demonstrate to my Marketing class: IF we look at the fundamentals of Strategy as detailed in Michael Porter's Five Forces, we can clearly deduce that, for Levi's in the USA, they are powerless to defend Threat of Entry and Threat of Substitutes; Power of Buyers is high because, in all three, switching costs are LOW. Further, brand loyalty is less and less of an issue in the US; is it temporary in Europe and Asia?

Levi's seemingly has convinced Gartner L2 that they are the resurgent force in the jeans market and on their way to being the major player that they were 40 years ago; it is their job to do that. And they also want their customers to know that they are environmentally sensitive and solidly behind sustainability. Great for the planet, but do customers care?

The numbers don't bear that out.

Finally, regarding the IPO, I hope their return to public financing won't saddle them with the fatal dose of debt that killed Sears and Toys R Us, among others.  Based on the numbers in the 2017 Annual report, their debt is about $1.1 billion. Once the bots in the stock market get a hold of Levi's, and decrease their share price and market capitalization by 20% in one day if the results are not rosy and sunny, DESPITE their iconic brand  (like Kraft Heinz), that will be extremely damaging to their future.

So what is my recommendation? Levi Strauss, FORGET the IPO until such time as you have a firm brand footing and real price and profit growth in the US (by radically upgrading your value proposition). I believe a reason that Bob Haas wanted to take the company private back then was the unreasonable treatment in the stock market; that has not gotten better in the last 40 years.

(Full disclosure: I worked at LS&Co before and when KKR took it private. I was the leader of the team that marketed the Women's 501, which was an attempt to give Levi's the fashion relevance that it still seems to need now (since women buy more jeans than men).

Best of luck, folks. Go back to the basics of Strategy and reexamine. Leave the ego at the door.
at March 09, 2019