Politico Magazine Report: Coronavirus Will Change the World Permanently. Here’s How. AKA “The Big Hug” 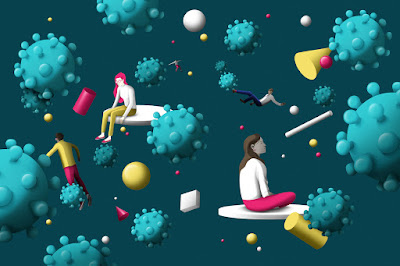 In my recent articles, I have been insisting that the world will never be the same after the Coronavirus all clear is sounded. From a business standpoint, I have been insisting that online shopping, especially Amazon, will be the default method (currently ecommerce only occupies around 15% of retail sales in the US); this will extend itself to areas where it was previously not a major factor, such as grocery/food.
I also have been saying that people will change, not only in themselves, but in how, where and when they relate to other people. What I call “The Big Hug” will be people cherishing the benefits of the social contact from which they are all but banned now. How will this manifest itself?
This past March Politico Magazine, in a report entitled, “Coronavirus Will Change the World Permanently. Here’s How.” received some opinions from experts around the country regarding different elements, those being:
Community
Tech
Health / Science
Government
Elections
The Global Economy
Lifestyle

Remembering the comments, theirs and mine, are just opinions, this article will focus on the Community and Lifestyle areas. Let’s look at some of their comments and then I will add my own two cents:

Deborah Tannen is a professor of linguistics at Georgetown and author, most recently, of You’re the Only One I Can Tell: Inside the Language of Women’s Friendships.

Quotes:
This loss of innocence, or complacency, is a new way of being-in-the-world that we can expect to change our doing-in-the-world. We know now that touching things, being with other people and breathing the air in an enclosed space can be risky. How quickly that awareness recedes will be different for different people, but it can never vanish completely for anyone who lived through this year. It could become second nature to recoil from shaking hands or touching our faces—and we might all find we can’t stop washing our hands.
My comment:
Yes- we will never be the same and we will bifurcate our approach to meeting and being near people into those we know and those we don’t.

The comfort of being in the presence of others might be replaced by a greater comfort with absence, especially with those we don’t know intimately. Instead of asking, “Is there a reason to do this online?” we’ll be asking, “Is there any good reason to do this in person?”—and might need to be reminded and convinced that there is. Unfortunately, if unintendedly, those without easy access to broadband will be further disadvantaged. The paradox of online communication will be ratcheted up: It creates more distance, yes, but also more connection, as we communicate more often with people who are physically farther and farther away—and who feel safer to us because of that distance.

My comment:
What I said, Amazon, et. al. that we can trust online will become the default. Distance will be the norm, closeness the luxury and the exception, or the less frequent.

A hunger for diversion.

Mary Frances Berry is professor of American social thought, history and Africana Studies at the University of Pennsylvania.

Quotes:
After the disastrous 1918-19 Spanish flu and the end of World War I, many Americans sought carefree entertainment, which the introduction of cars and the radio facilitated. Young women newly able to vote under the 19th Amendment bobbed their hair, frequented speakeasies and danced the Charleston. The economy quickly rebounded and flourished for about 10 years, until irrational investment tilted the United States and the world into the Great Depression. Probably, given past behavior, when this pandemic is over, human beings will respond with the same sense of relief and a search for community, relief from stress and pleasure.

My comment:
The question here is what will “community” mean and which circumstances will provide less stress and more pleasure and which the opposite. Again, the bifurcation of “those we know” and “those we don’t.” Not saying parties and dances won’t happen- but attendance won’t be second nature anymore.

Paul Freedman is a history professor at Yale and author, most recently, of American Cuisine: And How It Got This Way.

Quotes:
For the past few years, Americans have spent more money on food prepared outside the home than on buying and making their meals. But, now, with restaurants mostly closed and as isolation increases, many people will learn or relearn how to cook over the next weeks. Maybe they will fall back in love with cooking, though I won’t hold my breath, or perhaps delivery will triumph over everything else. Sit-down restaurants also could close permanently as people frequent them less; it is likely there will be many fewer sit-down restaurants in Europe and the United States. We will be less communal at least for a while.

My Comments:
This is a big one. First, I agree that sit down restaurants will lose business to people wanting to cook and, for those who can’t or won’t, prepared food or restaurant delivery; restaurants need to adjust to this lifestyle change and maybe even provide their own boxed meals. But I can see dinner parties and pot lucks becoming the rage.

Even more- The supply chain will have to adjust dramatically. What percent of  grocery inventory are idiot proof meals in a can or frozen, for microwave, etc.? Will people either cook their own or go for Uber Eats? I think so.

A revival of parks.

Alexandra Lange is the architecture critic at Curbed.

Quotes:
Urban parks—in which most major cities have made significant investments over the past decade—are big enough to accommodate both crowds and social distancing. It helps that it is spring in the northern hemisphere.

Society might come out of the pandemic valuing these big spaces even more, not only as the backdrop to major events and active uses, but as an opportunity to be together visually.

After this is all over, I would love to see more public investment in open, accessible, all-weather places to gather, even after we no longer need to stay six feet apart.

My Comments:
I like the recommendation here. More parks is good for urban dwellers, Coronavirus or not. Parks and outdoor venues with ample space will tolerate more people with less social stress.

The tyranny of habit no more.

Virginia Heffernan is author of Magic and Loss: The Internet as Art.

Quotes:
This current plague time might see a recharged commitment to a closer-to-the-bone worldview that recognizes we have a short time on earth, the Doomsday Clock is a minute from midnight, and living peacefully and meaningfully together is going to take much more than bed-making and canny investments. The Power of No Habits.

My Comments:
So, we have a terrible reality check on the preciousness and brevity of life. “No Habits” to me means get out of your routines and Live in The Moment- with Others.

Sherry Turkle is professor of the social studies of science and technology at MIT, founding director of the MIT Initiative on Technology and Self, and author, most recently, of Reclaiming Conversation: The Power of Talk in a Digital Age.

Quotes:
Perhaps we can use our time with our devices to rethink the kinds of community we can create through them. In the earliest days of our coronavirus social distancing, we have seen inspirational first examples. Cello master Yo-Yo Ma posts a daily live concert of a song that sustains him. Broadway diva Laura Benanti invites performers from high school musicals who are not going to put on those shows to send their performances to her. She’ll be watching; Lin-Manuel Miranda joins the campaign and promises to watch as well. Entrepreneurs offer time to listen to pitches. Master yoga instructors teach free classes. This is a different life on the screen from disappearing into a video game or polishing one’s avatar. This is breaking open a medium with human generosity and empathy. This is looking within and asking: “What can I authentically offer? I have a life, a history. What do people need?” If, moving forward, we apply our most human instincts to our devices, that will have been a powerful COVID-19 legacy. Not only alone together, but together alone.

My Comments:
Not only alone together, but together alone. That is the most insightful and thought-provoking comment of all that have been made about Post-Corona- including mine. Think about it: If we see being alone in the same light as we previously saw being together, that changes everything.
IF she is right, the message for brands is: the Internet has become a source of personal identification and empathy for people, so lose the underfed and blank-faced models and let’s see YOU.

Which, in summary, is my point. Everything changes, but how? We really don’t know for sure. I feel pretty sure that the digital world will become the Default, but in what ways and how, especially when it regards personal interaction, is yet to be seen.