Not Understanding the Relationship Between Price and Value Can Be (Is, Was) Lethal 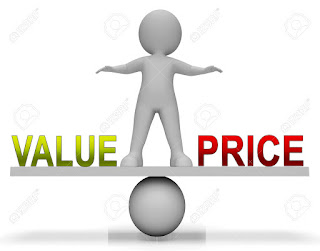 In her thought-provoking book, “The Value of Everything: Making and Taking in the Global Economy,” Mariana Mazzucato explains that the determinants of value had changed for many economists- and companies. What does she mean by that?

Let me explain the meaning and significance of that statement. Depending on how much value I see in the good or service (be it emotional, functional, or status) will depend on what I am willing to pay for it; In the reverse definition, the relationship reverses itself: The value of a good is determined by how cheaply I was able to buy it.

So, given the first definition, if I pay $100 for a shirt because of its materials, design, quality, sustainability, etc. I will consider that I paid for the characteristics and attributes of the item, and I would have paid more if that is what it took to acquire it; the second way, if I paid $30 for a similar shirt, no matter if it matches the first in quality, design, durability, etc. I got a real value for my money- aka Bargain.

Are there people who just can afford an $30 shirt and can’t pay for the $100 one? Sure. But, as Ms. Mazzucato is implying, most of the potential customers are those who could afford both, but whose minds got infected by the perverted definition of value.

For brands, letting (or encouraging) your customer to apply the second definition of value can be lethal- and has been for many brands and retailers who are, or are about to be, extinct.

Let’s start with Brooks Brothers, who Forbes reports is about to go into bankruptcy after nearly 200 years of existence. When you think of Brooks Brothers, what do you think of? I bet your answer is shirts. In recent years, the company has externally, and clearly internally, deemphasized their shirt business. Instead of making efforts to be in the forefront of fashion, color and pattern, and maybe translating their mens business to women, they decided it would be a better strategy to reduce the price of their shirts (same shirt) for volume purchases. So the $92 shirt became a $69 shirt.

So here’s how it ties to the above concepts of value and is one reason Brooks Brothers is about to die, or at least get very ill: The shirt is a very good shirt that was worth the $92- durable, non-iron, etc. So the characteristics of value $92, determined the price of the item.

Now, at $69 the price determines the value of the item: I can get this shirt for $69 so that is its value. $92 is a distant memory to the consumer as their price/value equation has been reset.

And Brooks brothers encouraged this mentality by continuing to promote instead of coming up with shirts whose value could command the higher price. (Note: once you train the customer as BB did, it is nearly impossible to get them to reset their price/value equation back to the value/price formula.

Wait for it—So the brand is—DEVALUED.

Let’s take another example (I could talk all day here, but I think after this you will get the point)- A Retailer. There are so many stories I could tell, but let’s talk about Macy’s.

Why did people turn to shop in department stores? Tracing the history back to the late 60’s, when I entered the picture in NY (not Macy’s, but their main competitor), it was because they found value in the brands and the reputation of the retailer. Department stores did not only represent one price point of value- there was budget, moderate, bridge, better, designer which represented the tiers of value available to you within the same building. All represented value for their target customers- and even, if you had a special occasion or got a raise/promotion, you could upgrade to the next levels.

Yes, there were sales. But these consisted of two things, neither of which could be expected: Markdowns on items that didn’t sell and specially bought or arranged promotions. But, as buyers, we lived for and were judged on what we could entice the customer to buy at first price- based on our ability to select.

After Macy’s took on tremendous debt by eating Federated, May Company and Broadway Stores in the 1980’s, someone decided that they needed to drive sales in a more predictable (?) manner by buying into and planning promotions rather than staking their business on the ability to select merchandise their customer would pay for because they considered the value. Wait- see- we just went from the first concept of value (value as a determinant of price) to the second one (price as a determinant of value).

And Macy’s did it very well: The price strategy had (and has) layers, conditions, and a schedule. But guess what? The customer figured out the schedule. So here we are at the same relationship- Price determines the value (today it is 25% off) but I know, even though the product may well be worth that price, that it will be 50% off really soon, so THAT is its value to me. Bottom line: nobody believes Macy’s any more.

Macy’s isn’t in Chapter 11-yet- but all the signs are there. If you look at the market cap of Macy’s, especially vs. other retailers like Walmart and Target, and where it has gone, you will feel embarrassed for them. Nobody in the corporation has the courage or insight to recommend a radical restructure. So where can Macy’s go? Their only chance is to become a real estate company (think about 34th Street- the rentals there would exceed the market cap).

Trust me, a company that sacrifices itself by F**ing up the value/price relationship is only left with one option: to secure funds for an impossible revival (because nothing is learned or it is too late) to the vultures of finance. What happened to Sears, JC Penney, JCrew, Toys ‘R Us, is a shameful end to a story; we resent vultures for eating leftover carcasses, but that is their role in the ecosystem. Forbes explains the case we have seen so many times lately:

Gordon Brothers, their new lender, is a fine firm run by smart people and very successful. But it is best known for expertise in bankruptcy and liquidation with extensive experience closing stores and liquidating them. Often when you see Gordon Brothers in a loan, it’s because no conventional bank will lend, and Gordon Brothers gets first dibs on running the liquidation in the event there is one.

Finally, let me answer a question that may be on your mind: What about those retailers, like TJX, who have built their businesses on price? Do they defy the concept?

Answer: No. Why? Because they got the relationship right. It does not matter at which level of the price scale they exist.

Let’s take TJX, with their TJ Maxx, Home Goods, Marshalls etc. stores. Once stores were allowed to open in parts of the country, these stores were mobbed. OK, you say, because their prices are cheaper. No.

These stores have not perverted the value/price relationship. They do not offer any pretense that the price justifies the value- their customer trusts them that, if they say the price is $9.99, that is the value. Unlike Macy’s.

Perversely, their buying philosophy is more akin to what we did in the late 60’s to what retailers like Macy’s are trying to get away with today. If we tell you this s**t is worth $19.99, it is. And their customers believe them in spades. And their selection process as opportunistic purchasers is at a very high level. Unlike Macy’s.

This is the key reason for the phenomenon that Steve Dennis calls Bifurcation 2.0: the department stores not only lost their relevance; they lost their credibility as value-determined locations and gave in to the reverse. In which they also are not credible, as is TJX.

Those who already got it wrong and are too arrogant to change, will see their carcasses consumed by vultures like Gordon Brothers or Eddie Lambert.

To me, this is not rocket science; what needs to happen, as our Native Americans say, is “open my eyes so I can see.” Or, strip away my bonus millions so I have to see.