Since the Pandemic began, literally thousands of cases of harassment, or worse, of Chinese and Chinese-Americans have been reported, despite the fact that, even if the virus did originate in China, those living in NY and other US cities had nothing to do with it, and are suffering the same dangers as non-Chinese. Unfortunately, this prejudice was sanctioned and even promoted by the White House (repeatedly). This is a stain on our democracy, but unfortunately not a new one.

In 1876, Mark Twain and Bret Harte collaborated on a play entitled, “Ah Sin” which told the story of a Chinese immigrant in the mining camp who learns from his Irish opponents how to cheat at cards better than them, and the punishment he suffers for doing what they do routinely. The play was intended to depict the hypocritical attitude of white Americans toward Chinese Immigrants; unfortunately, it had exactly the opposite effect. The play was not well received, and people took its meaning to be critical of Chinese Immigration.

Fast forward. We should first answer the question, “Wouldn’t the entire planet be better off with a productive relationship between the two great powers who have a dominant effect on world politics and economy?” My answer is, “Yes.”

I think we can also agree that whatever prejudice exists, it should not be the White House’ role to promote it. If you believe in Lead by Example, that ain’t it.

So, what do we do now, with a new Administration less than two months away?

Thus far, I have seen nothing but what I believe are wrong-footed strategies, even from those who should know.  One example is (with all due respect to my favorite mag) The Economist magazine, which, in the Leaders section of its November 21-27 issue, ran a piece entitled, “The China Strategy America Needs.”  The subtitle is, “As President, Joe Biden should aim to strike a grand bargain with America’s democratic allies.”

For several reasons, I don’t agree with this approach. Main reasons:

1. Democratic is not the issue. A functional one-party government is better than a dysfunctional two-party one. ‘Nuf said;

2. Even if we strike this “bargain,” what are the chances that our weaker allies will stand up to pressure, especially those in Asia who may even share a border with China?

3. It has been repeatedly shown in the past that China is sensitive, even a bit paranoid, about being “surrounded.” Isn’t this one key to why Mao agreed to the Shanghai Communique with Nixon and Kissinger in 1972? So how exactly does that solve the problem? China is supposed to say omigod, I should give in and do anything this group wants? History tells us this will never happen.

I am not just being a smartass here; I have studied, done business with, lived and taught in China for several decades, so I have a lot of empirical background for my disagreement. What do I think we should do?

1. Give up the democracy condition. China is not and never will be a democracy like the US (especially after the example we have provided for the world recently), and, BTW, it no longer fits the Communist profile, and BTW, our human rights record is not sparkling clean.

2. Focus on mutual economic benefit. There is no doubt that both countries have a huge amount to gain from a better business relationship.

3. Give up the “surround China” strategy. Sun Tzu, in his Art of War, states “Win All Without Fighting” as one of his main principles. What is to be gained by a costly war of attrition, by the US or its allies? We should be the leader of a successful effort, not a debilitating battle.

4. Talk to China directly, honestly and with respect for both our and their requirements; set the final objectives, and ground rules toward them.

5. ALL politics is culturally-based. Make understanding their culture, and our own, good and bad, as a prerequisite for negotiations, with equal respect for both.

We need to clean our glasses and see both sides clearly. My book, “Travels with Mikey: Business Life of a Global Foodie” soon to be available, will chronicle my half century of immersion in global business from a cultural point of view (yes, food is the focal point of every culture).

For now, I have little impact on stain removal. Those in power do, and, even with their best efforts, it will take a lot of time and effort to remove it. Prejudice against Chinese and other minorities is ingrained into our culture, and we cannot take our rightful leadership position in the world unless we recognize and eliminate it from influencing our attitudes and thus, our policy. 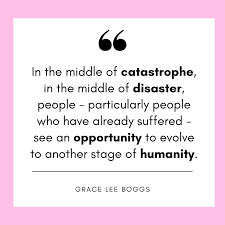