China, Russia, Ukraine and the World-The Plain Truth As I See It 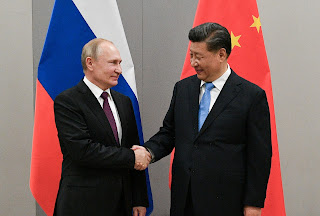 The news these days is full of stories about Russia’s invasion of Ukraine. Companies are trying to look good (or not look bad or complicit) by making statements and, in many cases, taking actions to separate their businesses from Russia.

And, of course, there are the sanctions. Many of Russia’s assets frozen, Russian Ruble and banks crashing. Yet that seems not to stop Putin’s war. So what will stop it without mass destruction? I think the world agrees that Putin will never say, “oops I made a mistake” and quit. Sanctions will make things worse and worse for Russia, which will likely piss off Putin more and more.

Even if Putin realizes this was all a big miscalculation, and even if more and more Russians and Ukrainians die, this war will only end when Putin gets to save face.

What complicates the situation more, yet is presented as a possible solution, is the show of alliance between China and Russia, which was timed to coincide with the Olympics and predate the war by a short time.

Recently, columnists and writers commenting on the situation have said that a. China realizes it may have made a faux pas and b. China is the best hope of a solution in the near term.

So what’s the Plain Truth of the situation for China? Let’s put ourselves in Xi Jinping’s place for a couple of minutes and think it through. We can look at it in terms of Good News and Bad News:

a. The Good News is that people will reduce their rhetoric about demonizing China and Xinjiang, etc. because next to Putin, China looks angelic.

b. More Good News is that It might have a positive long-term effect in cutting the bullshit between the US and China because both sides will realize that cooperation and collaboration without the political posturing is good for them and good for the world, especially if it groups Russia with the North Koreas of the world.

c. Some Bad News is that if China continues to sit on the sidelines and say nothing about the situation, it will be put into the same political corner as Russia.

d. More Bad News is that China, which had hoped to divide and conquer during the Trump Administration when he alienated everybody, has seen the West, NATO and the World come together as has not been seen since WWII. This is a major deterrent to thoughts about invading Taiwan.

e. Even More Bad News is that, as China’s economy slows down due to the crash of real estate and the negative effects of China’s Zero Covid policy on small businesses, it needs to be more export-driven than ever. Never good to alienate your customers is pretty much a given in the global business world.

Thomas L. Friedman, the New York Times columnist, in his opinion piece, “The Cancellation of Mother Russia is Underway,” suggests that China could join the rest of the civilized world (other than India) in the Boycott and even Sanctions on Russia because Russia’s action is undermining China’s mantra of stability (and for the reasons above); this, he suggests, would be too much for Putin and he would back off. Sorry, Mr. Friedman, my opinion is (and I so hope I am wrong) this is never gonna happen. I will explain why later.

Friedman does make one excellent point which can be our f. Much more Bad News is that the boycott is not just coming from nations, but from private actors as powerful as BP and Airbus. That is not a good prospect for China, which still depends on Western companies for equipment, grain and employment of its citizens, to say the least.

Shuli Ren, writing in Bloomberg Opinion, in her article “Why China Won’t Help Russia Around Sanctions,” also suggests that the fragility in China’s economy would prevent any bold actions that would endanger its export business and economically damage its population. That is true, but knowing China, I can say that is only true for the Known Knowns; the Known Unknowns part tells me that, if China wants to help Russia, we all may never find out.

Andreas Kluth, also writing for Bloomberg, mentions China’s “unsustainable doublespeak” regarding Russia (there was a source article for this but gated content got me and I refuse to open any such business model) and suggests that intervention would get China off the hook.

From my vantage point, if I were Xi Jinping, the signs would read as a problem and opportunity at the same time. Doing nothing might do nothing, depending on the course of events without China’s involvement, and doing something would ingratiate me to nations like the U.S. who are my biggest customers and with whom my relationship has suffered, to say the least. The best part of that is the economic and political squabbles that China has with the US and others are easily solved—much easier than solving Putin.

But the problem goes much deeper for Xi and it, as always, is a fundamental cultural problem:  After appearing in world headlines as Putin’s Buddy, condemning him and his actions, while clearly explainable from a political standpoint, would cause Xi Jinping to lose face. It has been clearly established by historians that one of the reasons Mao sent Chinese troops into Korea in October 1950 is because he was afraid that, after just taking over the country a year earlier, that he would lose face as a leader and appear to be weak.

This, by the way, is also Putin’s problem. Even if he fully recognizes his mistake, he won’t quit until the rat in him saves face.

Double problem, and probably one of the most difficult to solve. Am I the first one to mention this as a key factor? I hope not.

That, my friends, is the Plain Truth as I see it.