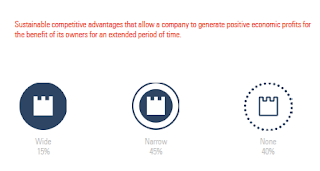 How about your Moat? And why am I still talking about them?

The concept of the Moat may be an old and worn one to the financial/investment community, but it is a fairly new one for me. So my infatuation with the concept continues because it is an excellent way to merge the tangible and intangible elements of business success. More, it focuses all business efforts on one goal: sustainable value creation-value being the difference between risk and reward.

That being said, I have always faulted the investment community for not considering the real boots-on-the-ground factors in a company’s performance and potential. The moat concept partially fills that need, but I think the investment gurus are not qualified to drill deeper into what really distinguishes and protects a company in today’s market.

A key criterion for all moat-evaluation is “barriers to entry.” In the world of apparel and retail, this may be just a little stupid. Really. Anyone with a good concept, good product and good execution, especially in today’s ultra-connected world, may waltz into a product space and disrupt it, compete in it, dominate it before we get our next coffee. This has always been the case; the difference today is the lightning speed at which it can happen enabled by technology.

I know I have championed evolution as the founding principle of change in the retail industry, but within the evolution there is the moment of emergence, blast-their-ass if you will, where a company emerges from oblivion to get the attention of many. Everlane, Tommy John, Untuckit, Bonobos, more. In most cases, these entrepreneurial heroes have been working for years with no satisfaction, then it frkn happens…

So they cross the moat and invade the castle of the established companies, how? By being cheaper? This has never been a weapon for new entrants. It is only the weapon of the old combatants who have stale cultures, which discourage entrepreneurship.  For the newbies, it is about being more interesting, more exciting, more desirable, while maintaining VALUE perception. Disruption crumbles walls.

So how do we really judge a moat? The investment world has metrics to assess the wideness or even existence of a moat. Because, as an informed investor, I need to know not only what is in the moat, but what is inside the castle. What are the elves doing to create and maintain sustainable value?

Morningstar’s report, “Wide Moat Investing” (https://www.cfasociety.org/cleveland/Lists/Events%20Calendar/Attachments/979/Wide%20Moat%20Investing%20-%20CFA%20cleveland%20May%202016.pdf) defines its moat rating (Wide, Narrow, None) in terms of “Sustainable competitive advantages that allow a company to generate positive economic profits for the benefit of its owners for an extended period of time. “ Key word-Sustainable. Price by itself is not a sustainable advantage.

Note only one of the above, Intangible Assets, relates to the most important elements of success and market penetration (Moat-busting) today- product, position, value perception, and shopping experience. What the elves are doing inside the castle.  The report gives examples of Wide, Narrow and No Moat companies with a brief explanation:

1.     Wide- Coca Cola- “It’s just sugar water, but consumers pay a premium.”
2.     Narrow- Adidas- “Has strong and recognized brand in athletic footwear.” (This is why we need to look beyond finance reports for the real answer. Brands are BS in today’s market; a brand is the poorest barrier to entry and the fatal flaw of those who hold on to it as a moat-widener or even moat-element)
3.     None- United Continental- “Name recognition doesn’t result in sufficient pricing power.” This explanation applies more to Adidas, and vice versa for Adidas’ explanation.

I note that the report chooses Macy’s as the No Moat example under switching costs: “Consumers easily pick and choose among many retailers.” What I said—Price does not help your moat. And, if you depend on it, as Macy’s has been, you are filling in your own moat.

An important aspect of Moat Evaluation in the report is the “Moat Trend.” As Warren Buffett said,  over time the moat is getting wider and narrower constantly, as business competitive situations are typically dynamic. Moat fluctuations are rated as Positive, Negative or Stable. Let’s pick some examples that would be familiar to us:

1.     Wide Moat-Negative- Walmart. “Shift to e-commerce will likely take share and make large Walmart stores less productive at the margin.” Yes. Even if Walmart expands its e-commerce business as it is trying desperately to do, it will be cannibalizing big chunks of its retail space, reducing sales/sq. ft. and revenue/employee. (NOTE: Next article up will evaluate Walmart and Target’s prospects-news at eleven).
2.     Narrow Moat-Stable-Ross Stores. “Competition likely to increase, but continued growing scale at Ross should offset major threats.” Maybe, but this is more true of TJX than Ross.
3.     No Moat- Positive-Not given in the report, but I might elect Target as my candidate here.

So, if you are paying attention here, and believe in the concept of the Moat, no matter who you are in the fashion/retail industry, you need to keep in mind two realities to keep your Moat afloat and create sustainable value over time:

1.    Any day a little startup ant of a company can turn your castle into a wasteland before you can say stock options.
2.    Your best defense is a good offense. Make sure the elves are working on the vision of a future with sustainable value creation. Not price, not community events or symposia (not that there is anything wrong with that), but real, bold, disruptive results in every area from design to merchandising to production to retail-every day in every way.

Folks, economic data that define the success of a company for its shareholders are the RESULT of these decisions. And what the elves are doing.