What's in YOUR Economic Moat?

I hope, a lot of crocodiles and piranhas (That’s a good thing, read on please).

I learned something recently. Researching exactly how the financial world had evaluated the winners and losers in today’s world of business (especially retail), I learned about the moat.

Following all the financial analytics, I came to wonder what the investment community looked at that told them what was behind the numbers.  It seems that all things product, marketing, supply chain, etc. are captured in the concept of the moat.

What is a moat? It is a body of water that traditionally protects a castle from invaders. Are you starting to see it now? We can see any business as a castle, with a moat around it. How effective the moat is determines in protecting the castle, both short- and long-term, its vulnerability to competitors and barriers to entry of its market share. Warren Buffett first coined this term and explains:

What we refer to as a “moat” is what other people might call competitive advantage . . . It’s something that differentiates the company from its nearest competitors – either in service or low cost or taste or some other perceived virtue that the product possesses in the mind of the consumer versus the next best
alternative . . . There are various kinds of moats. All economic moats are either widening or narrowing –even though you can’t see it. (Credit Suisse, “Measuring the Moat,” 2013)

To the investment world, the bottom line of Invest or No Invest is a firm’s ability for value creation-SUSTAINABLE value creation. So whatever the analytics tell you, the most important thing to take into consideration is the moat-what is the firm’s ability to withstand and stay a step ahead of its competitors? How easy will it be to take a piece of the firm’s business either by competing on price or product? How vulnerable is the firm to disruptive innovation?

So let’s take an example of an investor’s losses due to miscalculating or ignoring the moat.  Daniel Schonberger writes in Seeking Alpha on December 7th, “Lessons From 2017: Bed Bath And Beyond - The Worst Investment,” explaining why his investment declined about 50%:

OK, he really blew it, but note that he admitted that the moat should have played a “bigger” role. Damn right-The castle can be bright and shiny one day and rubble the next. The barriers to entry that define that housewares industry have fallen-to Amazon. Think about it-shower curtains, towels, sheets, rugs, etc. Any need to trek to BBBY today? What is different and better about their product that you shouldn’t buy on Amazon? Is the only reason to buy on Amazon price? No.

Could BBBY have done more than they did about it? I will always answer this question with a YES. As a consumer, I could see that BBBY went nuts with all form of coupon and discount-so after a while the only reason to go there was the challenge of how to manipulate the dozens of coupons you had to achieve the maximum savings.

Remember we said “sustainable value creation.” Price ain’t the way. Maybe BBBY could have made efforts to distinguish its product from Amazon, increased online penetration, or both. Or maybe not. In this case, the barriers to entry became pretty much zero for Amazon.

How will incumbents typically respond to disruptive innovation? Credit Suisse reports on a study by Christensen, who is famous for studying disruption, that

“For low-end disruptions, the motivation of incumbents is generally to flee…In the short run, fleeing helps profit margins by encouraging the incumbent to focus on the most lucrative segment of the market. In the long run, it provides resources for the disruptor to build capabilities that allow it to penetrate the mainstream market on a cost-effective basis.” (English- run away from your disruptors by focusing on your mainstream, most profitable, business, thus opening the door for the disruptors to do something new and great without interference)

“Incumbents are typically content to ignore new-market disruptions.”  (This is my “living in a bubble of denial.”)

So the choice of flee or ignore is based on whether the disruption is a better way to do things (such as Tommy John, Zara or Uniqlo) or a totally new idea (such as the bralette).

This is really the sum total of all I have been saying for more than the last 8 months, but translated into the simplest concept of why companies will or won’t survive-their moat. I believe that a. in all cases they could have seen the invasion coming and b. their bubble gave them no inspiration to be disruptive themselves, whether for protection or not.

One of my favorite walk-of-shame stories, L Brands, whose key unit, Victoria’s Secret, has not only lost their way and their mojo, but has thrown away their moat by walking away from the most important concept to arise in years-the bralette (see my earlier article, “Bra or Bralette,” http://www.isourcerer.com/2017/08/bra-or-bralette-know-your-dinosaurs.html) and capped off by their undifferentiated  and price-oriented approach to Black Friday (see my article, “Living in a Bubble of Denial” http://www.isourcerer.com/2017/11/living-in-bubble-of-denial.html

Yet, Morningstar, after documenting the really poor performance of the company highlighted by the decline of Victoria’s Secret, (http://news.morningstar.com/articlenet/article.aspx?id=795357), said:

We continue to think that L Brands has a wide economic moat with brand strength in a category characterized by high levels of consumer brand loyalty and prioritization of quality and fit over price. That said, we have been and remain concerned about execution strategies, specifically promotions and store growth plans.” (What I said-read my articles)

I disagree- they gave up the moat by paying more attention to their fashion show (and spending who knows how much) than what their consumer was doing at their competitors-namely, buying bralettes- and figured, arrogantly, that their brand was enough to get their customers to ignore a trend that put money in their pockets (lower cost of bralette, fashion right).

Folks, brand loyalty is BS in today’s market. With so many new brands popping up every day, whether on Amazon or by themselves, consumers have NO REMORSE about switching to Brand X if a. the price is lower, b. the styling is more innovative, c. the in-store or online experience is better and easier. Especially in the case of Victoria’s Secret, as bras and underwear are repeat items, the enemy at the gates is-or should be-a constant concern. Not ignored or fled from.

So how is your moat? This is a mission-critical way to think about your business. IN considering your moat and your vulnerability to invasion and annihilation, here are a few items to think about:

You are in the business of adding sustainable value (oh, I also talked about that,  repeatedly, in this blog).

So what are the  sources of added value?
1.     productive advantages
2.     Consumer advantages
3.     External factors
(You should have already evaluated all three tirelessly, and renew your assessment daily.)

Your moat is a barrier to entry. What are the barriers to entry for your business model? Better, Cheaper, Faster- this protects you.

What distinguishes your product from your competitors does NOT have to be anything as dry as price, fabric, or crotch length. NYU Stern’s Scott Galloway, in his new book, “The Four: The Hidden DNA of Amazon, Apple, Facebook and Google” talks extensively about ladders and moats, and gives the example of Apple’s “romance, connection and general awesomeness”:

So, Apple, recognizing that ladders will keep getting taller, opted for more analog (time/ capital expensive) moats. Google and Samsung are both coming for Apple. But they are more likely to produce a better phone than to replicate the romance, connection, and general awesomeness of Apple's stores. So, every successful firm in the digital age needs to ask: In addition to big, tall walls, where can I build deep moats? That is, old-economy barriers that are expensive and take a long time to dredge (and for competitors to cross). Apple has done this superbly, continually investing in the world's best brand, and in stores.

Where can I build deep moats? Do you ask yourself that question every day? Do you know what is your moat and how vulnerable it is? Are you ready to take the attitude of not only building deep moats (defenses with a crystal clear picture of your competitors AND where you are vulnerable, no matter what your company name or your brand) but also of building “big, tall walls? (offense-product differentiation, innovation, awesomeness, romance, etc.)?

(BTW, this requires you to leave arrogance and attitude at the door.)

You better be ready, and willing to change anything and everything that needs to be changed to be a sustainable value creator. OR, you will cease to be a destination for investors OR customers.

So, what is your story? Tell me about your walls and your moat. 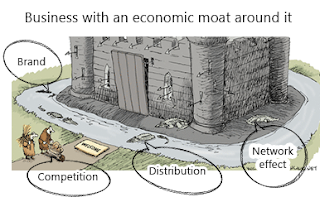