Will Costco Survive in China?

Will Costco survive in China? 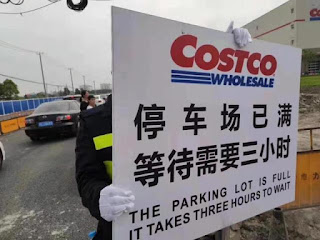 Recently (August 27), Costco made headline news because it opened its first physical store in China (Minhang district of  Shanghai- as a rough idea, 23km from Shanghai downtown Center to Minhang Center, not accessible by mass transit). Despite the location, the opening days turned into a frenzy, with people queueing up at 2a.m., and people literally fighting over goods. So much so that the store had to close early due to a situation which became potentially dangerous.

The headline welcoming offers were Hermes bag for $14000 and MaoTai liquor for $150. Membership fees were offered at $28.

Sounds good, right? The store surely opened with a bang. But those of us who understand the China retail scene will seriously question Costco's viability in the China Market. Why?

Foreign hypermart  and warehouse retailers have, almost universally, not been successful in China:

·     French hypermart Carrefour, after more than 20 years in China, sold 80% of their ownership stake to Suning.com, a local retailer, in June 2019;
·     Metro, the German warehouse store, is anxiously looking for a buyer for its stores in China;
·     Korean Lotte Mart has sold 93 of its retail locations to local retailer Wumei Holdings in 2018;
·     British retailer Tesco failed miserably in China and had to abandon itself to a joint venture that all but erased its identity (whatever it was).

What is the root of the problem that has chased respectable retail chains from China? And how can Costco overcome these challenges and survive? Everyone (including me) has an opinion on the answer to these questions, but the truth is that the real answer is, nobody knows- up to now there is no formula for success for foreign mass merchants- only a history of failure.

Having lived in Shanghai for ten years, I have personally seen and shopped at all of the above retailers. But my point of view, as a foreigner, even one with on-the-ground experience, must be understood in context; to understand why these retailers have failed, we have to understand the nature of the China retail scene and, most important, the mind of the Chinese consumer.

I used to believe that Carrefour was successful because they morphed their China identity to be, in many ways, a mirror alternative to local markets and online retailers; stores contained a very small import products section and 95%, including fresh food, was focused on duplicating local products. Now I realize that the ultimate failure of this chain was due to the fact that Carrefour did not establish a separate identity from the shopping alternatives; in most cases price, quality etc. was no different from the local markets and ecommerce sites such as Taobao and Tmall.

From the above, I believe that we can learn the first relevant lesson for Costco: These retailers focused on price, which in the China market is the equivalent of the destructive head-to-head battles of WWI- nobody really wins, but lots of people die in the process. That, and duplication of the local product that was available every elsewhere.

All over the world, for sure in China, people intuitively understand the difference between price and value. Price is tangible- it is a number and 100% factual- 2 is less than 3. Value is perceptual- it is the buyer's interpretation of the significance of the number to them and their lives.

If you try to compete on price in China, you are born to lose. Establish a unique and robust value proposition, and people will pay more for your product at regular price, and go nuts when it is on sale. In China recent retail history, this is the formula for success of Inditex (Zara, Massimo Dutti, etc.); everyday prices on goods that are current fashionable and are good value; when they go on sale, the enthusiasm of the customer rises to a fever pitch (kind words for shark-like behavior).

Additionally, as we have seen in mass market stores like Walmart in the US, leading with fresh food is the key to success. Fresher, Better and sometimes Cheaper should be the formula. Core value proposition: These grapes at 15RMB/jing (aka lb. in China) are better (I perceive) than what I can get on the street for 10 RMB. Costco needs to establish a niche in China that creates a perceptual divide of VALUE between them and the local competition.

Finally, a long list of foreign firms has failed in China because they either failed to understand the Chinese mentality or were too arrogant to believe they should. You cannot superimpose an American or European strategy on China without change. To succeed, management need a humble and complete understanding of what they are up against. They must follow Sun Tzu's principles and win based on superior intelligence and understanding of the marketplace. Should this intelligence be Chinese, foreign, Asia Asians, Western expat, etc? Frankly, my opinion is that it doesn't matter the nationality of the leadership, as long as they have lived/worked/taught in China and thoroughly understand the local social and commercial environment. In my experience, the best formula for a successful team is a collaboration of foreigners and locals working together as equals.

Even with the above said, Costco's success or failure in China will depend on the decisions and the decision makers- from the macro to the mundane. Based on history, Western companies will send their best and their brightest- who in most cases will lack maturity AND any track record of success (or even visits) to China, but will be fully full of themselves. Based on their inexperience and lack of understanding, (added to those of the executives in the parent company), history will repeat itself.

For Costco, it is more than selling great products at great prices; it is about learning from those who have come before and failed; then, move forward without arrogance and with full armor of market information: create an unique and robust strategy. if not, welcome to the scrap heap.