Gen Z: Up Next, Bigger than Ever? 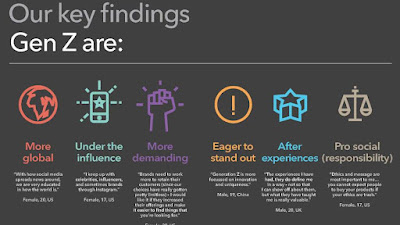 But not without issues

In 2015, Goldman Sachs issued a report entitled, “What If I Told You?” which as one of the “tells” said that “Gen Z will be larger and more influential than Millennials.” Numbers for this generation have ranged as high as 90 million, but there are unique attributes, which we will review below.

But first, let’s be sure we all agree on the generational delineations. Starting points for Gen Z and ending points for Millennials have varied a year or two, but here I use the latest data based on Pew Research Center’s work: 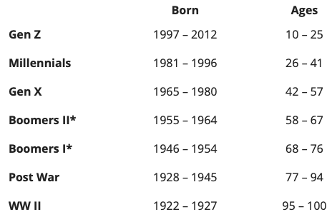 So why should we be excited about Gen Z and what questions are there about their consumption habits?

To begin, Gen Z were “born connected.” In 1997, the internet already existed and was quickly turning to a viable business mode (Amazon started in 1994). After the dot-com crash of 2000 (the oldest Gen Zers were only 3), those survivors formed the core of today’s online marketplace. By any assumption of when Gen Zers started to use the internet for social media and shopping (let’s say 10 years old for arguments sake), the medium was already thriving. So they grew up with a device in their hand and they know how to use it. This is not to say that they are addicted to online shopping (we also know they love the shopping experience, as we will see later), but having a device in their hand all day is in their DNA.

An addiction which represents an opportunity for marketers but a troubling trend for Gen Z, is their mental health based on 5-6 hours or more online every day:

Gen Zers were born into a troubling world, and are growing up with phenomena like the above and COVID-19. Does the plethora of social media opportunities make them feel part of a global community and that they are an important part of it? Apparently not: 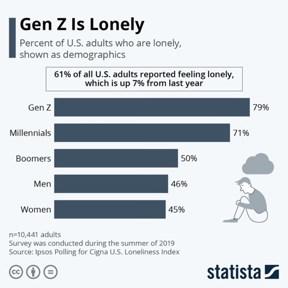 This troubling trend extends to a disturbing increase in suicide rates, especially among girls. CNN reports that “Starting in 2007, the rates of suicide for girls 10 to 14 increased 12.7% per year, compared with 7.1% for boys the same age. A similar trend was seen for teens 15 to 19, with rates of suicide going up 7.9% for girls and 3.5% for boys.” The report also points out that girls may be more vulnerable to the negative effects of social media and cites a JAMA report, saying that “’Compared with boys, girls use social media more frequently and are more likely to experience cyberbullying,’”

So how does the above influence Gen Zers as customers, given that there sheer numbers are so large and that they will doubtless enter the HENRY ranks in the near future? Some trends in their purchasing outlook continue the trend that was begun by their Millennial elders, but with more emphasis.

Let’s begin with the social profile of Gen Zers.

• One in four Gen Zers are Hispanic; these numbers increase in the Western US;

• The median household income where Gen Zers live exceeds that of older generations when they were young, at $63,700;

• They tend to be more liberal than earlier generations and vote in greater numbers.

So here we have a customer who is more diverse, is more educated than older generations, totally connected and sometimes unhappy. How does that affect their purchasing outlook and power?

To begin with, in addition to becoming a consumption powerhouse on their own in the near future, Gen Zers influence the spending of their households now.  The Shelf reports:

Some more highlights from that report:

• Gen Z values Privacy and Security, being more wise to the power and the reach of the global connection;

• Gen Z is willingly loyal to brands who meet their product, price and social expectations;

• Gen Z is working earlier and more than Millennials did at the same age;

• Having grown up during a recession, they are thrifty. But they don’t want fast fashion that disappears into the trash—hence the explosion of the RealReal  and other second hand web sites.

• They are passionate about social issues, hence would look down on companies that exploited workers as in Modern Slavery;

• They prefer authenticity and transparency in marketing;

• While they are at home with shopping online, 81% of the Gen Zers surveyed by The Shelf preferred shopping in store. They are a perfect example of the value of ROPO (Research Online, Purchase Offline) psychology because they value the in-person shopping experience, which makes them the perfect candidate for luxury brands.

While we have so far focused on the US statistically, we should remember that this is a globally connected marketplace and the purchasing power of Gen Zers in Asia is huge, which will account for 50% of luxury spending by 2025.

The fact that Gen Zers have grown up with some insecurity makes them even more of a passionate candidate for luxury brands. According to a Crobox report, the Gen Zer fits the psychographic profile of the luxury consumer:

• Luxury purchases are hedonic, releasing dopamine and making the buyer feel good about themselves. For the moment.

• They are impulsive, as gifts or “treats” making the purchaser feel they “can do it;”

• Luxury shoppers give the purchaser a feeling of financial power (even if they don’t actually have it or have it yet);

• Luxury consumers demand that their brands be “woke” in terms of sustainability, ethics, etc.

Further, the luxury customer falls into one or more of the following clusters, all of which appeal to Gen Zers:

• Costly Signaling and Status- Showing others you can spend it

• Building the Self and Self-Narrative- Who I am and who I want to be.

Troubled, concerned, and passionate. This profile of the demographics and psychographics of the Gen Z customer has me convinced that they will surpass their Millennial elders as the bedrock of the Luxury business in the near future. The time is now for brands to start cultivating and following them.