China: Water, Water Everywhere and Not A Drop to Drink (BTW, don’t breathe either)

China’s pollution problems. OMG. Having recently moved back to the NY area from Shanghai, I shudder at the amount of bad air and water, either directly or through the food and drink, I might have ingested in 10 years. Poison!

Blue skies, fresh air (like today in NY)? Almost never. Oh, and let’s add to the toxicity the constant construction all over the city (and for 6 months at my apartment community) that adds to the poison mess. We are breathing that every minute! What we do for money…

Some scary details-the charts look like those intentionally scary commercials for the evils of smoking): 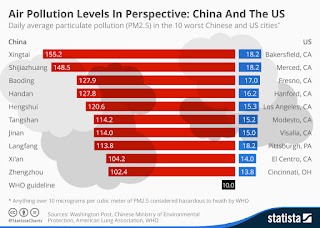 Pollution levels in the last year reached critical levels in major cities such as Beijing which were not tolerable for humans, and during which times movement had to be restricted. Not great for business.

2.     How about water? Some information from the Guardian:

“In 2015, 3.78bn cubic metres of untreated wastewater was discharged across China, including 1.98m cubic metres in Beijing alone. This is water that has been ruled unusable for agricultural, industrial and even decorative purposes dumped into rivers and lakes.”

“In Beijing, 39.9% of water was so polluted that it was essentially functionless. In Tianjin, northern China’s principal port city and home to 15 million people, a mere 4.9% of water is usable as a drinking water source.”

Now that we are all poisoned and dying, what, above all, are the consequences for our business?

Bloomberg reported, “What started with inspections in the Hebei region around heavily polluted Beijing—and where 176,000 small businesses could be forced to close by the end of September—was extended to all four major municipalities and 10 provinces as of August.”

Finally, the government is shutting down factories as a result of failed environmental inspections: “In an effort to combat decades of air pollution and contaminated soil, the Ministry of Environmental Protection (MEP) has been investigating different provincial areas since April. Nearly 18,000 companies, about 70% of the businesses examined, failed to meet environmental standards for controlling air pollution, the MEP reported in June. The latest round of inspections has focused on Jilin, Zhejiang and Shandong provinces, with many factories shutting down as a result.”

So, after years of turning a blind eye to the problem in favor of unparalleled export growth, the devil is claiming China’s soul: Clamp down on polluters, or the death toll from passive ignorance and corruption will result in epidemic and death which will give
China a black eye in their quest to be a frontline political and industrial power.

Seriously, if the Central Government is sincere in clamping down on pollution, regardless of the reason, that is exactly what they should do. I think they are, if not only because they must.

Long term, the benefit to us will be a sustainable industry that doesn’t kill people in the process. And, new technologies like digital printing will reach maturity because they are fundamentally better, regardless of higher cost. More people will invest in sustainable technology, so costs will decrease.

Those suppliers who invest in advanced technology and pollution control will survive. Those who do not will end up on the scrap heap of history.

Advice to CFOs-book this as an annual charge for technology adjustment-because nobody knows how long the process will take and when prices will begin to decrease. We know it won’t be short- China government has been amazingly fast at making changes, but, since this involves so many suppliers, we have to say at least 3-5 years down the road.

One thing is for sure- China will emerge on top of this situation-she always does. It’s all worth it-for industry and for the people.