A lot to focus on now, so let's offer up some of the key stories. Can expand on them later, but I don’t believe in padding words..

1.     China abolishes Term Limits-
So Xi Jinping will stay in power for the foreseeable future.  IF you read and believe the US press, it is a shadowy reminder of Munich in 1933. Not.

Yesterday, The New York Times  editorial was entitled, “Xi Jinping Dreams of World Power for Himself and China.” Questions: a. How do they know what he dreams? b. Isn’t China already a world power?  C. Isn’t it his job to “dream” of how to increase China’s power? This is typical ethnocentric writing, implying that only the US can and should dream of world power. A shame one of the world’s most influential journals can’t be more adult and objective.

The editorial ends with a criticism (of course) of President Trump:
In this regard, the White House’s response to Mr. Xi’s power grab was not encouraging. “That’s a decision that would be up to China,” the White House press secretary, Sarah Huckabee Sanders, said on Monday.

How refreshing and damn right. Who else would it be up to? The New York Times?

I would argue that this is not new for China. The cultural dynamic of the Mandate of Heaven is thousands of years old and reflects the Chinese mentality about government-as long as it is seen as benevolent and protecting the people, it can stay until it doesn't.

Second, China faces some financial and political challenges, so if I am the leadership I would feel that disruption at this time is not viable. There is precedent for this right here in US with Roosevelt. So we needn't act shocked.

This need not be a reflection of agreement or disagreement with Xi Jinping's policies or thought (another subject). Just the political reality in China. Yo..they would be a little stupid not to do what is right for them. And they are not stupid.

2.    Dillard’s and Macy’s-Dreaming of a White Christmas Past?
Wow. Is that all it takes to make the investment community happily spend their money?

Macy’s, on the heels of a positive 4th quarter report (which happens when your sales unexpectedly go up), has increased 14.8% since yesterday (27 February). So, knowing that, I have one question-Why?

All the questions about fundamentals that drove the stock to below $20 last year have been answered? The viability of the department store format has been resurrected as the retail of the future? Macy’s will not have to resort to price upon price marketing to keep volume up? Category killers like Inditex and Uniqlo have disappeared?

Macy’s Backstage format has been mentioned as further salvation, thrusting them into the mass market retail mix. I have been to these stores and I would call them WTW (Worse than Walmart). At least Walmart does testing on every garment in its store. Macy’s does NOT.
And TJX has nothing to fear.

So please tell me why should I buy the stock now?

Similar questions occur with Dillard’s. The stock jumped 10% yesterday based on the Q4 result. Nice. But wait, take a look at this- 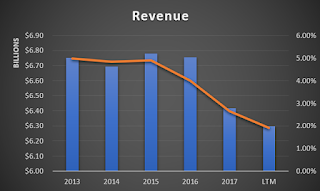 The blue bar is revenue and the orange line is net margin. What do I not understand here about why you would bid up this stock 10% in one day?

I worked at Dillard’s and I will say that it has something that Macy’s (and the rest of the department store world, even the higher priced ones) do not have: a true belief in and standard of customer service. So Dillard’s can stand out and forge its own path. That being said, it cannot stubbornly bring in expensive (albeit good quality) merchandise of questionable aesthetic and hope to compete. Customers just don’t care that much anymore. So let’s keep the service and give the merchandising a wash and rinse.

Sorry, dear folks, I am shorting Macy’s and Dillard’s.

3.     Under Armour and Kevin Plank and Under Armour-
I wrote about this before, you can read the article. (Adidas, Nike and Under Armour-The War for Your Workout http://www.isourcerer.com/2018/01/adidas-nike-and-under-armour-war-for.html)
In which article I expressed my opinion about the opportunities for the UA brand to correct itself and its’ stock price.

Seems founder and CEO Kevin Plank is being thrown under the bus for all the troubles that have befallen the company. This may or may not be true, but I have a hard time believing the same guy who built an iconic brand in the company of giants has lost his mind completely.

I just don’t know here, but I would like to.  In the meanwhile, what would I do with the stock? Wait. Currently it sits about 50% higher than its low in November 2017. That may or may not be sustainable given all the bad gossip. So here I wouldn’t short it, but wait for something substantial before making a decision. Like change of management? I believe in this brand, but bigger brands have been tanked due to mismanagement.