What’s the Problem with Walmart?


At this writing , Walmart’s stock price is down more than 12% in 2 days. This is roughly an $40 BILLION loss of Market Capitalization. Sounds like a lot? It is. Target’s ENTIRE market cap is about $40B. Macy’s market cap is $7.81Billion. Adidas entire market cap $45Billion. So Walmart, in the last two days only, lost 5 Macy’s, or a Target, or an Adidas.

What is the reason for such a steep decline in stock price after a less than desirable earnings report and a less than crushed ecommerce growth? Really- we have seen MUCH worse reports than this in the past year- See Sears, Under Armour, L Brands, Bed Bath & Beyond, etc. So why freak out over this one (make no mistake-this qualifies as a freakout)?

Here’s why the precipitous decline in stock prifce-and nobody is telling you, but it IS why- such a dramatic response to a not so dramatic report: Everyone was counting on Walmart to be the antidote to, and the competition for, a rising and seemingly unstoppable Amazon. So the expectations that rode up the stock price from $80 in October 2017 to $109 at the end of January 2018 were-false? Too optimistic? Not borne out by facts? Poorly thought out? All of the Above?

We will go further into the problem in a minute. But here is the battlefield report for today: Walmart’s moat is breached. Now Amazon, at a Market Cap of $710Billion, is 2.5 Walmarts. What is worse or better depending on who you are is that, in the last two days, Amazon stock price has increased from $1457 to $1490. The drawbridge is down, and the rats are leaving the ship.

I believe some stock analysts are smelling around the problem, and some have come close to the answer. But they didn’t get the real smoking gun-to be revealed below.

What they did get:
1.     Only 23% growth in ecommerce is what freaked out the investment community;
2.     Walmart has leaned on Marc Lore and ecommerce growth to make its argument and defensive plan against Amazon, and showed that face to the public-Walmart as ecommerce destination;
3.     Walmart has given it up for ecommerce growth, and damn the torpedos on margin- Per one analyst’s estimate*: 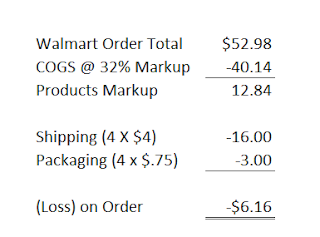 IF this is even a little bit true, Walmart is losing money on each ecommerce order, VERSUS the margin they might make on instore sales.

4.     Here’s something that didn’t escape the analyst, and that we ALL probably know: It is not pleasant to shop in Walmart: Overcrowded, too big, staff not even a bit helpful (do NOT believe the smiley faces you see on TV ads), very difficult to find what you want ON YOUR OWN. So, as the analyst said,

The nearest Walmart location near my home is a few miles away but I never really enjoyed shopping in any Walmart stores. I find them to be too big and too crowded. However, I do like a good deal. (https://seekingalpha.com/article/4148677-deep-drill-walmarts-problem-e-commerce)   Please go ahead and forward the comments to me of anyone who says they LIKE shopping at Walmart.

I have repeatedly said that the key to the brick and mortar world now is the EXPERIENCE. Here Walmart has repeatedly failed and sacrificed improving that aspect for the holy grail of ecommerce.

Maybe to say Walmart’s moat is breached is giving too much credit. What would be more appropriate is to say that Walmart attacked Amazon with inadequate thought, preparation, understanding of the big picture and-BANG-12+ % stock decline. All your troops died in the assault.

Here's a graphic of Walmart's latest investment in ecommerce-what does this have to do with the shopping experience (I plead ignorance of deeper strategies which I don't get): 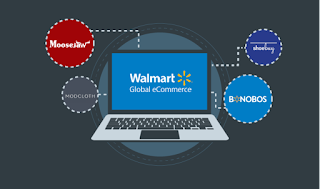 What does any of this have to do with improving the shopping experience at Walmart?

As if that were not enough, here is the poison pill that Walmart took that nobody else will tell you (assuming they even know): Walmart’s headlong rush into ecommerce missed a key aspect which I am sure will come back to bite them in the ass, unless they get out of their bubble and deal with it:
Walmart’s stores, at approximately 250K square feet, must produce enough sales per square foot to justify the ROA metrics. BUT-a +44% in ecommerce sales cannibalizes store sales. It is NOT a get out of jail free card on sales robbed from Amazon or anyone else-the switched sales are coming from Walmart. Walmart customers have found a great way to get the prices Walmart offers without the nasty store experience. So the net gain is-NEGATIVE. All the store workers (those you see with the smiles on TV) must be paid. Oops.

Here's some propaganda from Walmart: 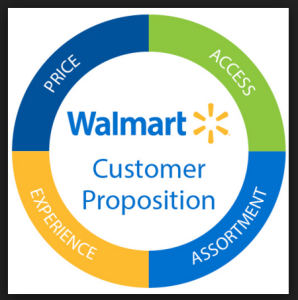 If you think the above is even close to accurate, please contact me. Or stop reading.

Does this mean that Walmart is on the eve of destruction? Only if arrogance and the bubble of denial leads them there (see SEARS).

Let’s see if they can get a grip on reality. If they can, they are still the no.1 contender for the title.

What I have said repeatedly in my articles, and will continue to say: Ask for help. Nobody has all the answers.

So, in summary: Walmart’s stores, at something like 250,000 square feet, are dependent on sales/square foot for their metric of profitability. As it has been since the dawn of time. BUT- an increase in ecommerce of 40+ percent per year comes from where? Amazon? Nope. It is cannibalizing Walmart’s brick and mortar sales-why? Because nobody likes shopping in Walmart, and, if you can get the same price deals and NOT have to go to the shop, yesss. Meanwhile, NOBODY in Walmart has EVER commented on improving the shopping experience from nasty to pleasant, much less delightful. We KNOW brick and mortar growth today depends on delightful.

Can Walmart strengthen its moat and pose a legitimate threat, or at least  competition, to an Amazon that is 2.5 times its size? Takes a dose of HUMILITY and some strategy. Oh, and maybe some investment in resources and people (which, at ground level, has been an enduring issure for Walmart).

So Walmart, the elephant in the room for much of recent retail history, turns into the mouse that roared. Check this forecast out: 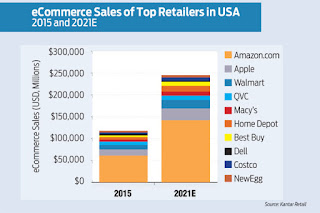 We are privileged today to live in a dynamic environment where anything can change. Depends on how you approach your business-and your moat.