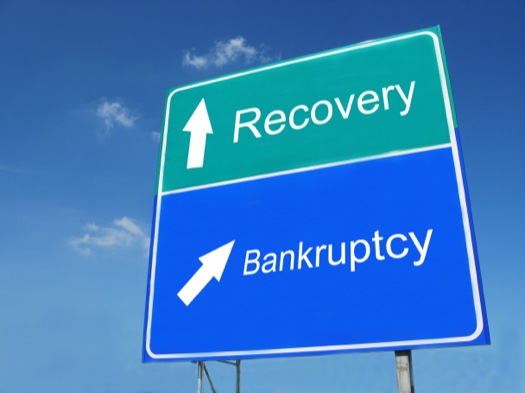 (The original version of this article was the most popular in the shortest time during the more than 3 year history of this blog- below is an expanded edition of the same post for your enjoyment!)

Bankruptcy is a legal proceeding involving a person or business that is unable to repay their outstanding debts. The bankruptcy process begins with a petition filed by the debtor, which is most common, or on behalf of creditors, which is less common. All of the debtor's assets are measured and evaluated, and the assets may be used to repay a portion of outstanding debt.

So, in my simple terms, a company that owes more to its suppliers, landlords, employees, etc. than its sales will repay can file Chapter 11 to protect it from these debts- temporarily. Temporarily should mean that the company can stay open and earn revenue while it figures out how to pay these debts.

IF you owe more than you take in, there are only two ways to change that situation: 1. Generate more sales; and 2. Borrow more to pay the debts.

Can you actually “emerge” from Bankruptcy and not go back?

what you couldn’t before you filed; In case 2, if you don’t accomplish case 1, all you are doing is like the song, Sixteen Tons: “Another day older and deeper in debt.”

There is case after case of companies filing bankruptcy and being so overwhelmed with the debt service that they have to do the only thing possible: File Chapter 7 which may allow discharge of debt and liquidation of assets.

There are fewer cases of companies that have emerged from bankruptcy (and stayed viable, not returning to bankruptcy) to become profitable enterprises. Those that did have had to rejuvenate their offering, or venture into blue oceans. Examples of this are Apple (near bankruptcy in 1997 and saved by Microsoft, yes, it’s true), Marvel Entertainment, bankrupt in 1996, now owned by Disney and wildly popular. (Investopedia)

In the apparel industry, fewer still have emerged and stayed out. One example was Wet Seal, which ventured into plus sizing to save itself. Many others, such as Toys R Us and Sears were too choked by debt and too lost as to what to do. 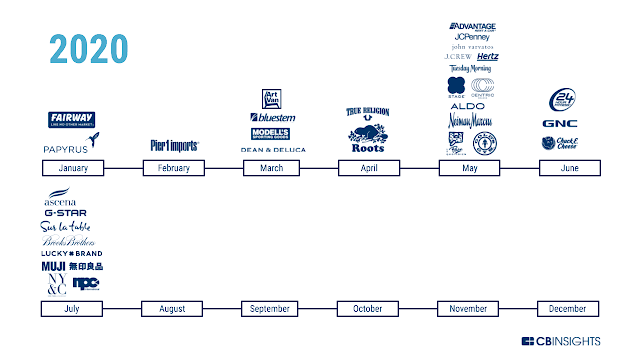 IF we view Bankruptcy as a disease, the main cause is the loss of relevance. Either someone took the company’s relevance while it was asleep, or it just forgot to evolve, or both. Great companies survive all manner of financial downturns, some may become even more relevant during it (there are many cases of this during the Pandemic, starting with Amazon, Walmart, Best Buy, etc.). IN summary, there are five main causes for retail bankruptcy in general:

1.     Loss of Relevance- The retailer was successful or iconic in a former period, and failed to maintain its relevance in today’s e-commerce driven world; Loss of relevance can occur because either the retailer fails to change, OR is disrupted by other companies taking its business away by offering;

a.     A more attractive value proposition and/or

b.     A superior customer experience which includes friction-free purchasing

2.    Failure to Evolve with the Customer:

a.     The influencer groups and the social imperative today have changed from years ago- if the company stands on its brand and does not evolve, it becomes a dinosaur with extinction as the inevitable consequence.

b.     The customer’s view of value is changing with the dominance of e-commerce. Beyond ecommerce, Omnichannel shopping has become ubiquitous; Walmart, Amazon, Target are aggressively balancing their online and Brick & Mortar offerings, with great success.

a.     In today’s world, a retailer is a brand, along with any private brands they bring along. Amazon, Costco, Trader Joes, Target, LIDL, Walmart all are prime examples of retail branding. As a consequence, self-standing brands lose the loyalty and respect of customers that they used to have.

4.     The Polarization of Retail and loss of significance of the Great Moderate Middle:

a.     There are two dominant value perceptions on the part of customers today:

i.     The Value of an Item Determines its Price- This is attributable to customers who are willing to spend money for quality, sustainability, beautiful material, longevity, etc. Common amongst customers who shop for designer or high-end brands;

ii.     The Price of an Item Determines its Value- For these customers, the lower the price the higher the value; e.g., if I get something for $10 it is inherently a greater value than if I paid $20 for it or something like it. Common perception of Dollar Tree, Walmart, TJX etc. shoppers.

5.    Management Lost Their Way or Never Found It:

a.     Always: The Fish Stinks From the Head

b.     More often than not, in cases of Chapter 11, Management has no Clue as to what to do to save the company; or

c.     It is hamstrung by lenders who want to cut costs and not invest in the company they lent to;

d.     They are hired from outside, because the company has failed to build succession leading all the way back to when they were successful and they need to find a patch.

The above graphic is taken from an online article entitled, “Here’s A List Of 113 Bankruptcies In The Retail Apocalypse And Why They Failed”. If you go through the list, you can see that all of the failures touch upon all or some of the Five Reasons I listed above.

Among the examples is my favorite case, Brooks Brothers, which has been a dominant name in menswear, especially shirts, for as long as I can remember (that’s a while!), lost its way as a brand leader with poor merchandising, including a discount brand, Red Fleece, which was housed in the same physical location (how confusing is that about a brand?) and transitioned its value proposition to the Price Mode, thus losing its core customer. The article says about BB:

Storied menswear brand Brooks Brothers has grappled with evolving its brand in recent years, as more casual dress styles have become the norm. After it filed for bankruptcy in July, retail management firm Authentic Brands Group and mall landlord Simon Property Group won the bid to buy out the brand by offering a zero-interest loan.

Ouch. A realtor and a “retail management” firm. What chance do you think that BB has to really reinvent itself and invest in rebranding?

Finally, as I have said in other articles, for companies like JCrew, JC Penney, Ascena and more, COVID-19 is not the cause of death. It is the executioner. Chapter 11 is merely a stay of execution. Why? Tell me, as in the case of Wet Seal, who reinvented themselves in Plus Sizes, what plans for improving its relevance via product mix and customer base, have you heard from the latest list of casualties?

One retailer who, in my view, has a very good chance to emerge from bankruptcy is Neiman Marcus. Clearly, they are making efforts to get closer to their customer and personalize their offering; IF they match these efforts with great and sustainable investment dressing, they will have completed their task and should be able to generate the income necessary to pay down and back the debt. I have said this a few times, most recently in my last article, “What is the Future of Retail?”

As a former department store retailer, I believe I am right. Let’s see.

The bottom line is that Chapter 11, for most, is just a stay of execution. Companies who found themselves in the position to have to resort to Chapter 11 Bankruptcy filing, were usually lost as to their relevance in the marketplace. What is the answer for those companies: Use the Brand Name or Store Name good will and retool, revitalize; strip anything that didn’t work and reinvent themselves. In most cases, as with Sears and JCrew, the Brand has value; it just needs to be applied to the current market.