How Do We Manage the Future of Capitalism- Shrug?

How Do We Manage the Future of Capitalism- Shrug?

“‘Mr. Rearden,’ said Francisco, his voice solemnly calm, ‘if you saw Atlas, the giant who holds the world on his shoulders, if you saw that he stood, blood running down his chest, his knees buckling, his arms trembling but still trying to hold the world aloft with the last of his strength, and the greater his effort the heavier the world bore down upon his shoulders- what would you tell him to do?’

‘I…don’t know. What…could he do? What would you tell him?’ 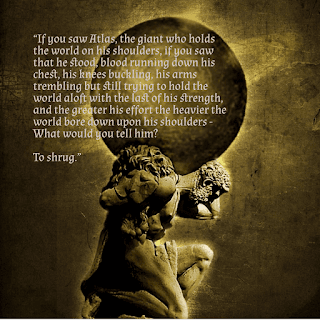 Lately, there has been a lot written about the future of capitalism.

The current situation, accelerated and highlighted by COVID-19, has yielded increasing income inequality, bankruptcies, unemployment and Bernie Sanders-who tried to secure political capital by proposing a move to whatever he called his political system, where everyone gets something whether they earned it or not.

The inequality is striking:

We have a system-capitalism- that was built on the freedom for everyone to capture their dream without the interference (not regulation) or participation of government. It has been copied, cared for, and mutated around the world. Most important, is not to confuse Capitalism with a political system. Vietnam and China are one-party, “Communist” governments that have risen to the top of the economic ladder by conducting themselves how? Not what Bernie would have them do- giving the freedom and reward to individuals to be successful based on their own efforts; the dramatic effect of their success is Capitalist- that they provide jobs, community growth and income for those who could not do it on their own, but who can serve and follow.

So, to me, Capitalism is not an economic system, it is an economic process whereby people, with the permission and sometimes assistance of governments, can realize their own vision and make it real.

Any political system that discourages or punishes individual effort at the expense of the entrepreneurs by mandating that individual effort must be diluted by taking away what is rightfully earned from those who earned it, to those who did not or could not. And it has an unbroken record of failure, according to world history.

So any political system can allow Capitalism to exist and encourage it for the welfare of its citizens.

Mao tried to equalize the playing field in China, but now, China is as financially unequal as the “Capitalist” countries, if not more. George Orwell predicted that fatal flaw in Communism with his novel “Animal Farm,” which saw a group of pigs come to the conclusion that, “All Animals Are Created Equal, But Some Are More Equal Than Others.”

Is this ok? Shall we thank our benefactors who provide us jobs and let this inequality continue as they get richer and richer to an obscene level (nothing wrong with RICH- it is a matter of degrees), and be thankful for what we get?

Or should we look for a way to temper the situation without resorting to a Bernie world or having wealth handed to people who don’t work for it?

Here’s my basic proposition: We need to improve the middle class standard of living, as we saw at the end of WWII- everyone with a house, car, two kids and a dog; If we do, it will benefit the rich in the long run as people are better off and can buy more; if not, the super rich will see an erosion of their wealth as economies stagnate and everyone’s wealth withers.

So, finding a solution to improving Capitalism so more people can share in the benefits of production and marketing is in everybody’s interest.

So what does that mean? It certainly doesn’t mean overturn the whole system, or grab what someone else earned, because you want to make a political point or you have not thought through what to do about it. It means to adjust- or SHRUG.

Our Atlas is straining, whether we see it or not- and we have the power to support him.

So what do we have to do? This requires collaboration by the great economic and political minds of our time (we have lots of them) AND telling the politicians (non Partisan- All of them) to stand back while We, The People, work out a viable solution.

Let’s look at some contemporary opinion and current events as a starting point.

Ray Dalio, the CEO of Bridgewater Associates, one of the world’s largest hedge funds, (and also a member of that Rich Guys fraternity) has made a thoughtful analysis of the situation and future of capitalism; in a recent article published in CNN Business entitled, “Ray Dalio: We must reform capitalism, not abandon it,” he analyzes the situation:

Agree on what? How we fix a good and proven system so that more people can benefit from it without disincentivizing those who can create the wealth?

In “Atlas Shrugged,” Ayn Rand imagines a world where those who create wealth are stripped of their companies and wealth by a government who takes away because it can. And a world where people with money and power are told that they must share with those who can’t or won’t or are just too lazy? Back to Animal Farm…this doesn’t work- it will just evolve back to the inequality that Orwell predicts and that Mao hoped to eliminate but didn’t. If the power to create wealth is taken away from those who can, what will be left is  only those who can’t (Read on in Atlas Shrugged and you will see Ayn Rand’s scary vision of this scenario).

So how to solve this problem?

Here’s a start, as I see it: Create a society that does not allow greedy accumulation by the few where it will negatively affect the lives of many. Here’s an example:

JC Penney, which has just filed for bankruptcy and has been declining for years, at the expense of the loyal employees who have served it for years, will give out $10 million in executive bonuses, including $4.5 million to CEO Jill Soltau.

The excuse is that the bonuses are given to “retain and continue to motivate its key executives.” Huh? This group is  responsible for the current irrelevance of an  iconic institution and failure, what else do they have to claim? When I was in companies large enough to confer a bonus, I remember years when I didn’t get anything because the company had not met its goals (regardless of whether I had met mine or not). What changed? Why do executives who presided at the death of a company deserve to be rewarded for it? What could that $10million add to the lives of the innocent, hardworking employees whose employment was terminated through no fault of their own?

Mariana Mazzucato, in her groundbreaking book “The Value of Everything,” begins to give us a clue to start a solution by her main thesis of distinguishing between the “makers” and the “takers.” This book is the beginning of a road map to MODIFY, not ELIMINATE, Capitalism as our core economic system. Her basic thesis is: Modern economies reward activities that extract value rather than create it. This must change to insure a capitalism that works for us all.

How exactly to do this without making radical, destructive and socially stupid changes a la Bernie is at the beginning of its conversation and learning curve. Everyone should participate in this conversation; the one no-no is don’t leave it to the politicians- politics never solved anything for anyone except them.

I want to be part of this process- we all should be and we all have equal right to cast our opinion and thoughts. As should you.

What I believe to be true, as Ayn Rand said, is that we don’t want to let or cause Atlas to fall and drop the world; we don’t need revolution, war, or other catastrophic events to solve the problem. Most of all, we don’t need POLITICS. Tell the politicians to go fly a kite (ALL of them) and let’s put our heads together to solve this.

What we need is a “Shrug,” not a crisis.