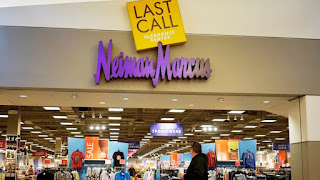 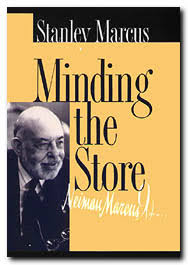 Of course, the above is the title of a 1974 book by the late Stanley Marcus in which he shows us how a real merchant is created and operates. At that time, Neiman Marcus was unique. While consciously relevant to a certain niche of customers, he had the admiration of those who couldn’t afford the luxuries as well.
I remember reading the book as a buyer for the late A&S of the late Federated Department stores, and being thoroughly inspired and awestruck. This was a merchant prince whose shoes I could dream about, but never really hope to fill.
This week, we were informed of Neiman Marcus Chapter 11 filing. For anyone like me, who had not been following the daily story, you had to wonder, “what happened to the magic?” Clearly, there had not been an overnight meteor strike; clearly, as with others, this decline had happened over a number of years.
In filing, NM joined a list of other well-known names such as J. Crew, Sears, JC Penney in the same financial boat. But why? The headline in a recent article in CNN Business online read, “Four Famous Stores That Might Not Survive Because of Coronavirus.”
Wait- Because of Coronavirus? The way I see it, this headline implies that, had not the Covid-19 Pandemic occurred, that they would or even might have survived. I believe that, in the case of at least Penney’s, Sears and J. Crew this is not the case. (Whether Neiman Marcus would have survived depends on who you listen to, but the symptoms are totally similar to the other three.) The Coronavirus might be the kill shot, and it hastened a death that was already well on its way- not caused it.
Mark Cohen, Director of Retail Studies at Columbia Business School, who worked at A&S back in the day, was quoted in the article: "The retailers who were wandering around aimlessly pre-pandemic are going to be substantially less likely to muddle through than they were before”. I think that is a great and appropriate choice of words- wandering around aimlessly implies a loss of direction or orientation- there’s the rub.
So what will be our cause of death for these stores? Let’s start with what we can rule out: Coronavirus. If a patient is ill with cancer and dies from pneumonia, we can call pneumonia the direct cause of death, but the real culprit is the cancer, right?
One common theme running through all of these failures is debt. Which is understandable in a store whose sales are declining. The more they decline, the harder to suffer the debt burden. All of these cases also have in common their debt being the result of a leveraged or other type of buyout by some institution that buys companies not to run them, but to sell them at a profit. And, while they are waiting, the company has to pay them a huge sum of money so they don’t lose if they can’t sell. To be honest, I do understand desperation, believe me, but I don’t understand why companies would enter into such a deal given the track record. Oh, I understand that when you have a business that you want to survive you will do anything, even if it is totally stupid financially.
So our first cause of death is debt aka greed.
I know that, if the companies in question could bring their businesses alive, that the debt burden would now be so overwhelming. So what’s up with that? Well, that, in my view, is the second cause of death- irrelevance.
Since retail is not a zero-sum game, the implication is that, if these companies became irrelevant, that would be because their customers had other choices that were more relevant to their lives and or purchasing behavior.
So, looking at Sears, Penney’s and J. Crew, who were on the top of the retail world not so long ago, how could this happen? Oh, don’t let’s blame Amazon, that’s too easy an excuse.
You would think that an iconic brand like the 3 above with a name that goes back as far as the 19th century would be able to parlay that name into the merchandise and the retail experience that people wanted. They could not have reinvented themselves? Sears, for example, has been declining since 2008. Here’s a look at the sad picture for both Sears and Penney’s:

So, we are talking in May 2020 about Chapter 11; and we are talking about Coronavirus as the cause. So my question is: What happened in the intervening 12 years where both have been in a precipitous decline? To use Mark Cohen’s well-chosen words again, have they been “wandering around aimlessly” for 12 years?
Once they saw that their Moat was being breached and that other retail entities were thriving at their expense (such as Walmart, Target, Costco, BJ’s, etc.), was there no course of action for them? Further, when the online world became more important and Amazon became the King Kong of it, could they have not attempted to reinvent themselves both physically and online? When Walmart became a grocery, couldn’t Sears or Penney’s have had a grocery? Or a warehouse store like Sam’s Club?
My take on this is that you don’t have to be a retailing genius to figure out that maybe there were some efforts missed or opportunities lost, or
Greed?
Maybe the appropriate term is more than “wandering around aimlessly?” Can we add “living in a bubble of denial?”
My feeling is that at least some CEOs had a fear of radical change, because it would point the finger at them for the failure and thus endanger their jobs, shares, options etc. so they either were in denial of what they had to do or afraid to do so?
Which brings us to my second cause of death: irrelevance. The failure to evolve and remain relevant to a changing world and changing customer, as well as protecting their Moat from others who were more interesting and attractive to their former customers is a direct cause of the slow death that has befallen these three and others such as Toys ‘R Us.
IF they had recognized and attempted to deal with the causes of erosion when they first began, the degree and cost of reinventing or updating themselves would have been lower, and less difficult.
To this I would have to add a third possible cause of death: arrogance. Falsely comforting themselves with what they were, and are, may have prevented them from seeing clearly what they will be or should be.
I wrote about a clear example of this attitude regarding L Brands Victoria’s Secret division, which at one point was on top of the Bra and Panty world, and now can’t find a buyer. The article, written in August of 2017, was called, “Bra or Bralette? Know Your Dinosaurs” in which I clearly predicted their demise based on that merchandising decision, but, more important, the attitude that caused them to walk away from the bralette business, thus spitting in the face of evolution and riding the road to irrelevance.
But what about Neiman Marcus? Will they survive Chapter 11 or join the Former Great Retailers Graveyard? Depends on a. even with the debt they have escaped, will their cost of existence be untenable? and b. Are they willing to humbly reinvent themselves to be relevant to the current market?
The way I see it, the fact that they seem to have committed themselves to Ecommerce is encouraging. If they follow that up with an interesting and engaging persona, which they certainly have the history for, not underfed models and folded shirts, they have a chance to parlay their great name into something attractive. Today’s customers want something that is sustainable and original. As a former department store merchant, I can feel the effort. Can be done.
I wonder what Stanley Marcus would do if he were alive today? I believe that he certainly would not be afraid to make any and all radical changes that are needed for his customers. As I teach my marketing classes, “Find products for your customers, not customers for your products.”
For me, the bottom line is that Coronavirus is neither a reason nor an excuse for the death of an institution which was already in serious decline. 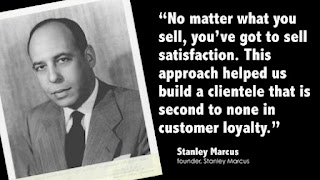